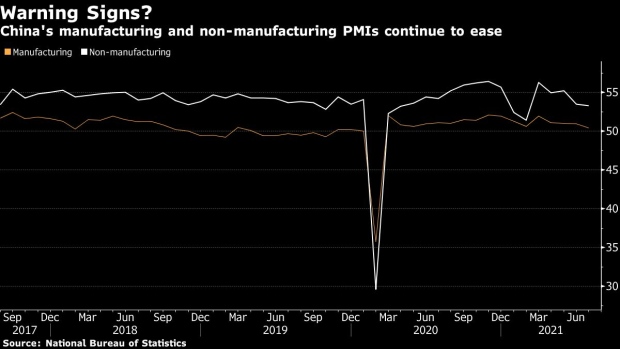 A worker clears a ditch near under construction residential housing developments in Shanghai, China, on Thursday, July 29, 2021. Chinese policy-making bodies collectively issued a three-year timeline for bringing “order” to the property sector, long under scrutiny due to an excessive buildup of leverage among home-buyers and developers. Photographer: Qilai Shen/Bloomberg , Bloomberg

“The policy efforts to support the economy will likely step up,” Citigroup’s economists led by Liu Li-Gang said in a note Monday. “In particular, we see more targeted measures underway to help small and medium-sized enterprises, as indicated by the mid-year Politburo meeting.”

The Politburo meeting preceded data showing factory production, which has underpinned the economy’s recovery, coming under pressure in July. The official manufacturing purchasing managers’ index fell to a weaker-than-expected 50.4, while the Caixin index, which captures sentiment of smaller private firms, dropped to 50.3 from 51.3 in June.

China bonds rallied Monday on signs of the slowdown. The yield on 10-year sovereign notes slid five basis points to 2.8%, the lowest since June 2020.

The emphasis of macro policy autonomy in Friday’s statement is in line with our view that the People’s Bank of China is ready to go separate ways from the Federal Reserve.

For 2H, this means the PBOC will probably ease policy relative to the Fed to counter downward pressure on China’s economy, while a continuing robust U.S. recovery allows the Fed to begin to ponder policy normalization.

The recent coronavirus outbreak in the eastern city of Nanjing has spread to other parts of the country, adding further risks to consumption and production as cities like Beijing tighten transportation restrictions. Fourteen provinces have been affected so far with 328 cases nationwide this month, almost equaling the amount of cases reported in the previous five months combined, according to the National Health Commission.

The Politburo signaled that fiscal spending through the issuance of local government special bonds will accelerate in the second half to support the economy.

It also likely indicated the end of a tightening stance by omitting the phrase that there’ll be “no sharp turn” in policy, UBS Group AG economists led by Wang Tao said in a note Saturday. They see the possibility of another cut to the RRR to boost liquidity, although a policy rate reduction is unlikely. Credit growth in the second half will probably stabilize, the economists said.

The People’s Bank of China said it will guide actual lending interest rates to a stable and lower level through reforming the rates market, according to a statement published Saturday, after officials met to discuss work priorities in the second half of the year.