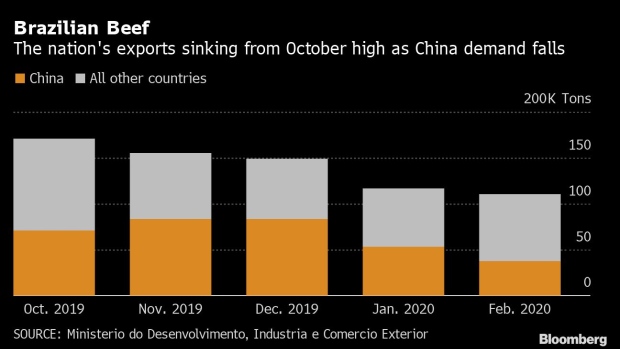 Pork chops are displayed for sale during the grand opening of a Whole Foods Market Inc. location in Burbank, California, U.S., on Wednesday, June 20, 2018. , Bloomberg

(Bloomberg) -- China’s demand for its staple meat, pork, is staying strong despite fears that the coronavirus outbreak would hurt consumption.

Shipments from Brazil, a key Chinese supplier, more than doubled in February from a year earlier, according to figures from the Brazilian exporter group ABPA. That’s keeping prices high in the South American country.

China is facing a major protein shortage after the spread of African swine fever ravaged its hog herd, the world’s biggest. That has boosted the nation’s meat buying for months, but some analysts were worried the health crisis would now mean a dent in demand. So far, that hasn’t been the case, at least for pork.

With restaurant crowds thinning out over fear of exposure to the virus, cooking at home is on the rise: Good news for pork, China’s favorite meat. But it’s also meant declining consumption of beef, which is eaten more while dining out. Analysts at Rabobank have said that pork “appears to be the least-affected” by the outbreak compared with other proteins.

“The African swine fever impact on hog herds in China and Vietnam has kept shipments strong, at unusual levels for this time of the year,” Ricardo Santin, a director at ABPA, said in an emailed report.

Meanwhile, disruptions at Chinese ports have started to clear up, allowing shipments to continue flowing.

China is the top destination of Brazil’s beef and pork. The South American country is the main beef supplier to the Asian nation and ranks seventh for pork, according to Rabobank.

For a detailed look at the Brazilian export figures from ABPA, click here.

To contact the reporter on this story: Tatiana Freitas in São Paulo at tfreitas4@bloomberg.net