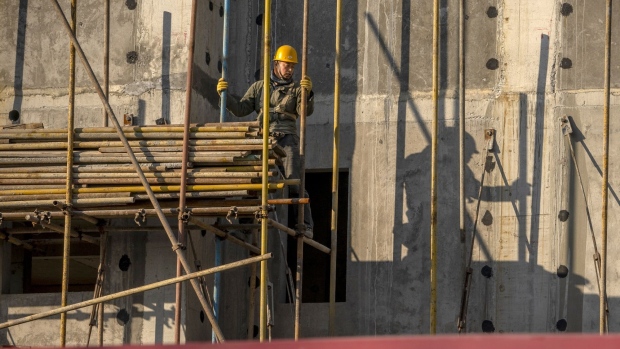 A worker at the construction site of a China Evergrande Group development in Beijing, China, on Thursday, Jan. 6, 2022. Evergrande is seeking to delay an option for investors to demand early repayment on one of its yuan-denominated bonds, in the latest sign of distress amid a broader real estate debt crisis. Photographer: Andrea Verdelli/Bloomberg , Bloomberg

(Bloomberg) -- China’s property sector shrank at a faster pace in the final three months of last year as the country’s housing slump continues to take its toll on the economy.

Output in the real-estate sector shrank 2.9% in the fourth quarter after a 1.6% contraction in the previous three months, the National Bureau of Statistics said Tuesday in a supplemental report on gross domestic product. That was the first consecutive quarterly decline since 2008.

The construction sector also saw its output decline by 2.1% during the same period. Those two sectors combined were 13.8% of national output in 2021, according to Bloomberg calculations, lower than the 14.5% in 2020.

Despite authorities’ efforts to ease some restrictions on real-estate funding, China’s property market slump persisted in December, with the downturn spanning developers’ sales, investments, land purchasing and financing activities. Property investment in December shrank 14% from a year earlier, according to Bloomberg calculations. For the full year, it grew 4.4%.

China’s economy in the fourth quarter grew at the weakest pace in more than a year, weighed down by the housing slump and weak consumer spending, data released Monday showed. Gross domestic product expanded 4% from a year earlier, down from 4.9% in the previous quarter. Growth of industrial production quickened slightly in December, but retail sales slowed sharply.

The breakdown of the GDP data confirmed the weakness in consumption, which was hit by restrictions to control repeated virus outbreaks throughout the year. Hotels and catering grew 4.7% in the fourth quarter, slowing from a 5.7% expansion previously. That weak sentiment may continue for a while, with the omicron variant spreading in several Chinese cities.

Growth in the manufacturing sector remained solid, rising 3.1% in the quarter from a year ago, reflecting the limited impact of virus restrictions on industrial production as well as strong global demand for Chinese goods. Value-added of manufacturing industry accounted for 27.4% of GDP last year, up 1.1 percentage point compared to a year ago, Monday’s data showed.