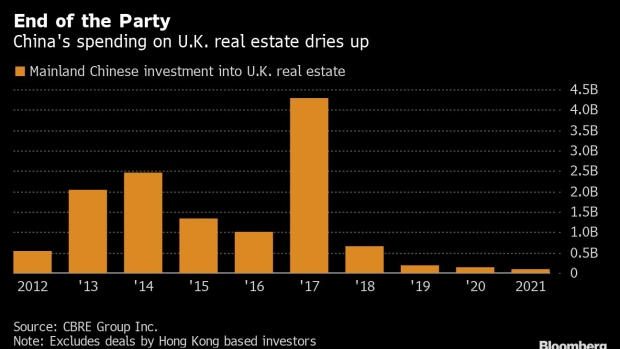 (Bloomberg) -- In London’s Royal Albert Dock, almost two dozen buildings conceived of as a new Chinese Canary Wharf stand mostly empty and in the hands of lenders who have finally pulled the plug.

About 10 miles to the west, some construction workers angry at not being paid have downed tools on Guangzhou R&F Properties Co.’s flagship development in Nine Elms. And in Paternoster Square, in the heart of the City of London, the tycoon behind embattled developer Shimao Group Holdings Ltd. is in talks to sell a prize office building previously occupied by Goldman Sachs Group Inc.

It is a sign of how ripples from China’s troubled property markets are making waves overseas. The crisis at home, coupled with a freeze in U.K-Sino relations, the introduction of capital controls and the after effects of Brexit, have seen the torrent of capital that once flowed to London from China all but dry up.

U.K. real estate deals by mainland Chinese investors have plunged by almost 88% in the past five years, according to data compiled by Real Capital Analytics Inc. The drop in deals for development sites was even more pronounced, falling to just 11.3 million euros ($12.8 million) last year from a 2017 peak of 731 million euros, the data show.

The sharp reversal is a familiar pattern in London’s boom and bust real estate market that has seen successive waves of international capital wash in and out. The global financial crisis brought an end to a surge in debt-fueled Irish investment in the U.K. capital while Japanese investors racked up huge losses two decades earlier.

Chinese investors poured into the U.K. in the first half of the last decade as the Conservative government led by then Prime Minister David Cameron and then London Mayor Boris Johnson courted investment. The ABP project in London’s Royal Albert Dock, which saw City Hall sign over 35 acres of derelict land to little-known developer Xu Weiping was supposed to be the jewel in the crown.

Read more: He Built It But No One Came: China Chills the Next Canary Wharf

The deal represented not just a vast investment in bricks and mortar but was also meant to provide a home for dozens of up-and-coming Chinese businesses, create thousands of jobs and strengthen Anglo-Chinese ties. Almost seven years later, what’s left is a vast swathe of empty buildings and a city that’s grown so impatient over the lack of progress that it is threatening to reclaim the land if the lenders can’t show they plan to continue.

“The Greater London Authority has been concerned for some time by the lack of progress by the developer at Royal Albert Dock and served ABP with a final termination notice in August after the developer proved unable to meet all of its obligations under the agreement in place for delivery of this scheme,” a GLA spokesman wrote in an email. A representative for ABP said the project had been hit by factors beyond its control including Brexit, delays to London’s new cross-town rail link and the pandemic.

ABP now joins a growing list of other Chinese developers, who have run into trouble in London. Dalian Wanda Group Co. was forced to sell all of its London projects including the giant One Nine Elms development in 2018 as it rushed to pare debt and focus overseas investment on assets deemed strategically important to China.

“There was a definite change in tone from President Xi in the past few years towards wealth and speculation,” Mat Oakley, head of commercial research at real estate broker Savills Plc said in an interview. That shift served to shut off new investment and the China Evergrande Group crisis that blew up last year is now prompting some of those that previously bought in the U.K. to sell, he said.

The buyer that came to Dalian Wanda’s rescue in London, Guangzhou R&F, saw a 42% sales slump in January, according to China Real Estate Information Corp. data. Shimao, whose chairman is selling the Paternoster Square property, experienced a 63% drop.

Some workers on R&F’s One Nine Elms project in London have been sent home and the site is now operating with a skeleton staff, according to a worker on the site last week. The construction delays are the result of late payment issues between R&F and the site’s main contractor Multiplex, he said. Construction News reported the delays earlier.

“R&F Properties and Multiplex are working together to deliver One Nine Elms, with a program of works continuing to take place on site, returning to full capacity shortly,” a spokesman for R&F wrote in an emailed response to questions.

It’s one of dozens of high-priced apartment projects being packed into the narrow strip of land along the River Thames from Vauxhall to Battersea where sales have stagnated during the pandemic.

Dalian Wanda arrived in London at a time when debt-fueled Chinese conglomerates including now collapsed HNA Group Co. were in the midst of global acquisition sprees. Laden with debt, HNA didn’t generate enough profit to cover its interest payments and was forced to sell properties at steep discounts. Sales included the former Canary Wharf headquarters of Thomson Reuters Corp.

Greenland Holdings Corp. has also partially retreated. The Chinese developer bought the site of the former Ram brewery in London’s Wandsworth district in 2014 and built out the first phase of 338 apartments and 70,000 square feet of commercial space which it continues to manage.

In 2021, it decided not to progress with the second half of the project and has now sold the rights to build phases two and three to a unit of U.K. developer Berkeley Group Holdings Plc, a spokeswoman confirmed via email.

While the Chinese property crisis has principally impacted developers, signs of the pressure it is putting on investors are also showing up in London’s trophy investment property market.

Hui Wing Mau, chairman of  Shimao, is in talks to sell an office building in London’s Paternoster Square to Goldman Sachs, people familiar with the talks said. React News earlier reported on the talks. Representatives for Mau did not respond to requests for comment. A spokesman for Goldman Sachs declined to comment.

China Vanke Co. and Fosun International Holdings Ltd. are both also in the process of selling London office properties.

“It isn’t that different from what we saw from Japanese investors a few decades ago,” Andrew Thomas, London based head of international capital markets at broker Colliers International Group Inc said in an interview. “They ended up selling properties from their international portfolios in order to help stabilize their domestic markets.”