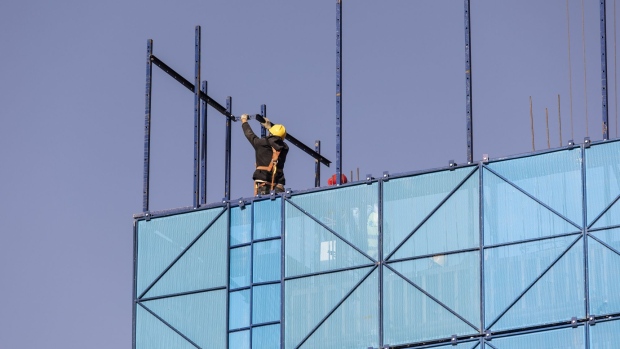 A worker installs safety netting at an apartment block under construction in the Nanchuan area of Xining, Qinghai province, China, on Tuesday, Sept. 28, 2021. China has urged financial institutions to help local governments stabilize the rapidly cooling housing market and protect the rights of some homebuyers, another signal that authorities are worried about fallout from the debt crisis at China Evergrande Group. Photographer: Qilai Shen/Bloomberg , Bloomberg

(Bloomberg) -- China’s local governments are struggling to find good infrastructure projects to invest in this year, meaning there’s less spending to support the economy just as growth is slowing.

Tighter controls over how local governments spend their money has resulted in a dearth of good investments, with cities and provinces slowing down their borrowing this year.

About 1.15 trillion yuan ($180 billion) of this year’s 3.65 trillion yuan special bond quota was still unused as of Oct. 21, according to Bloomberg calculations based on bond issuance data, meaning authorities have less money on hand to pay for infrastructure. At the same time last year, about 95% of the similarly-sized quota had been sold.

The caution is a result of authorities increasing efforts to ensure they can get proper returns from projects and thus reduce repayment risks, and comes amid a broader slowdown in government spending as China tries to cut debt. The recent real-estate downturn has also hit public revenue from land sales, further limiting the government’s ability to spend.

Read more: China Holds Back Fiscal Spending When Economy Needs It Most

A shortage of quality projects this year and tightened rules for screening projects contributed to the slow issuance, Li Qilin, chief economist at Hongta Securities Co. Ltd., wrote in a report Monday. “In the short term we shouldn’t have too much hope in infrastructure investment, which will rebound moderately at best in the fourth quarter.”

The Ministry of Finance issued a regulation in July that required local authorities to step up their assessment of how money from special bond sales was being used. That MOF document became a “filter” that sifted out many projects with unsound investment proposals, according to Wang Zecai, a researcher at the Chinese Academy of Fiscal Sciences, a think-tank affiliated with the Ministry of Finance.

Provinces including Guizhou, Fujian and Hubei have also strengthened their monitoring of special bond projects’ performance in the third quarter.

First introduced in 2015, special bonds have become an important source of money to pay for government infrastructure projects. Unlike general bonds that are repaid from normal fiscal revenues, the special bonds are repaid with income generated from the specific projects. If the money is spent on unprofitable endeavors it can saddle local governments with both debt and uneconomic projects.

“Judging by the current progress, it will be hard for China to issue all of the remaining 1 trillion yuan worth of special bond quota in the next two months,” said Ding Shuang, chief China economist at Standard Chartered Plc.

The sales of bonds usually slows in the last three months of the year, partly because it’s too cold for construction in some parts of the country. Since 2019 Beijing has allowed local governments to start selling special bonds from January, rather than wait until March when the program is officially approved by parliament.

This may change in 2022 given the slow progress in issuance this year, with governments selling the remainder of this year’s bonds through March, according to Liu Peiqian, China economist at Natwest Markets Plc in Singapore.