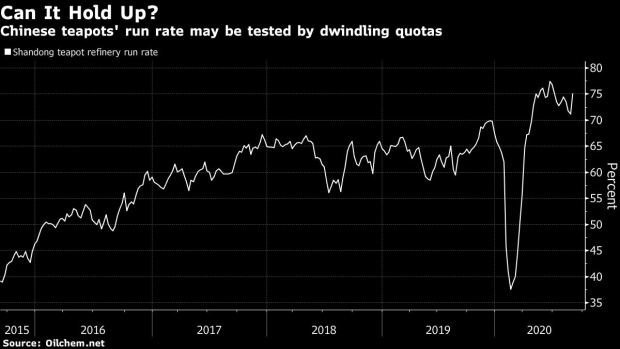 Oil storage tanks are seen in this aerial photograph taken on the outskirts of Ningbo, Zhejiang Province, China, on Wednesday, April 22, 2020. China's top leaders softened their tone on the importance of reaching specific growth targets this year during the latest Politburo meeting on April 17, saying the nation is facing "unprecedented" economic difficulty and signaling that more stimulus was in the works. Photographer: Qilai Shen/Bloomberg , Bloomberg News

(Bloomberg) -- China’s record haul of crude is poised to end as state-issued allowances for imports dwindle, potentially taking the wind out of the uneven recovery across global oil markets.

The world’s biggest importer will ship in much less crude in September and October than it did in May and July, with private refiners seeing purchases drop as much as 40%, according to analysts from ICIS-China and FGE. The drop-off is coming as the plants known as teapots run out of quotas following a buying binge earlier this year.

The reduction will test the resiliency of the oil market, which has seen prices recover from the lows of April but is still contending with virus lockdowns in major markets and OPEC+ members adding supplies after cutbacks. China’s independent refiners were the first to recover from the virus and have been among the most active buyers supporting oil’s rebound.

“Some active buyers have used up the import oil allowance,” said Li Li, an analyst with commodities researcher ICIS-China. “That could shut the channel for them to further process imported oil for rest of the year.”

Market participants had expected extra quotas for teapots to be issued for use in the fourth quarter. But with nothing done less than a month to go before the quarter begins, refinery executives and traders supplying these processors now say they’re not confident that it will happen.

Refiners operated by state-owned companies such as Sinopec and PetroChina Co. do not require import quotas.

In September and October, arrival of new crude cargoes purchased by private refiners, excluding delayed shipments, could fall to 40 percent of that in May and June, according to Chen Jiyao, head of China client advisory with FGE.

The nation’s oil imports hit a record 13 million barrels a day in June, customs data showed. Foreign purchases are poised to fall in the coming weeks as oil-laden tankers continue to wait off major ports and as refiners work through the overhang of crude and fuels.

Quotas aside, the recovery in China’s oil demand in the coming months will hinge on the strength of gasoline and diesel demand during the seasonal peak period -- usually in September and October -- and whether it’s enough to draw down record-high stockpiles. As of end July, inventories for the two fuels were nearing the 85% threshold that’s considered the maximum safe level, according to oil analytics firm SCI99.

Although domestic demand for gasoline, diesel, jet fuel and fuel oil is inching higher, the overall consumption isn’t keeping up with the “stellar recovery that crude buying or refinery runs would imply”, according to Michal Meidan, head of China research at the Oxford Institute for Energy Studies.

“Even with demand returning, stockpiles are building in China suggesting that the nation’s crude buying will slow and product exports will rise,” Meidan said in an August research report.