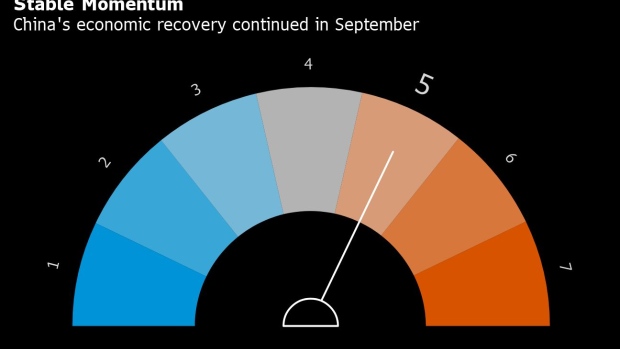 That’s the outlook from Bloomberg’s aggregate index of eight early indicators, which stayed unchanged in September for a fifth month.

The knock to the economy in August from delta virus outbreaks and a pullback in the property market likely lasted through September. China introduced tougher new curbs on travel to squash virus cases from late July, resulting in a marked slowdown in retail sales spending last month. Fresh outbreaks earlier this month disrupted holiday spending during the mid-autumn festival in September and puts a damper on the upcoming national day holiday break.

Authorities have also tightened restrictions in the property market to curb financial risks, reducing funding access for real-estate developers, and slowing the pace of mortgage lending to home buyers.

Global demand also showed signs of weakening this month after staying surprisingly resilient in August. South Korean exports, a barometer of world trade, rose 22.9% in the first 20 days of September from a year earlier, down from 41% in August’s preliminary report.

Factory-gate inflation likely trended higher this month, with a set of data tracked by Bloomberg surging to the highest level since the peak in June. Commodity prices continue to boom, adding to inflation pressure, while surging power demand and production cuts in coal and steel to meet emissions targets drive costs higher.

The widening gap between consumer and producer price inflation is adding to the financial pressure of companies, especially smaller ones, who aren’t able to pass on higher costs to households.

Confidence among small and medium-sized enterprises improved marginally in September on better credit conditions, but the growth momentum indicator moderated for a third straight month on weakening new orders, according to a survey of more than 500 companies by Standard Chartered Plc.