Industrial output rose 9.8 per cent in April from a year earlier versus the median estimate for a 10% increase. Retail sales expanded 17.7 per cent in the period, far slower than a projected 25 per cent rise. Fixed-asset investment grew 19.9 per cent in the first four months of the year, in line with forecasts. The unemployment rate was lower at 5.1 per cent. 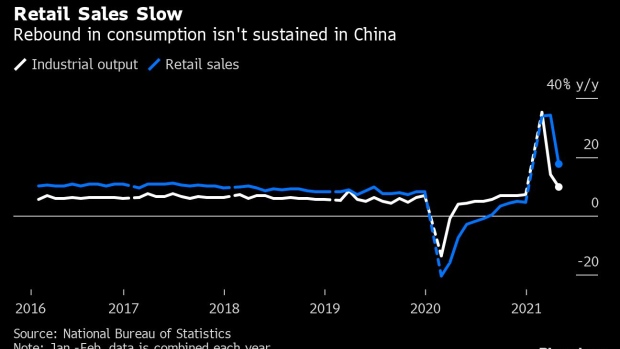 The data underline that while China remains a global growth driver and source of demand for commodities, the economy’s expansion may have plateaued as policy makers seek to rein in real estate and scale back infrastructure stimulus before new growth drivers of consumer spending and manufacturing investment have recovered.

“Economic growth likely peaked in the first quarter” on a quarter-on-quarter basis, said Zhiwei Zhang, chief economist of Pinpoint Asset Management. “We expect growth to gradually slow in the coming months.” Monetary policy tightening is probably on hold for now, he said, with small Covid outbreaks in China in recent days adding to policy maker’s caution.

The data was heavily impacted by base effects from April 2020 when China’s industrial economy reopened after the coronavirus was brought under control. On a two-year average basis, which corrects for that distortion, industrial production growth was constant from the first quarter at 6.8 per cent, while fixed-asset investment accelerated slightly to 3.9 per cent from 2.9 per cent.

However, retail sales growth softened to 4.3 per cent in April on an average two-year basis from 6.3 per cent in March, with the consumption of goods and catering services both turning weaker, denting expectations that consumer demand was beginning to replace investment as a driver of growth. 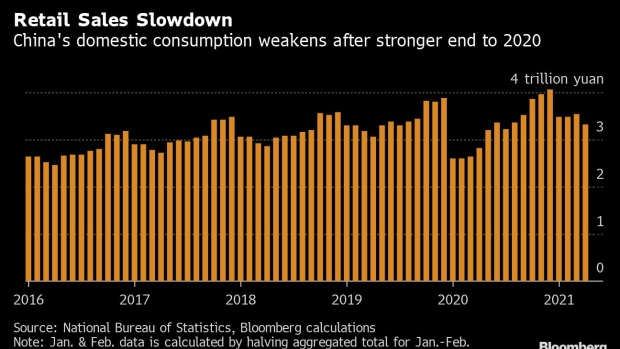 Households in China have yet to “resume their usual swagger” due to weak income growth, said Frederic Neumann, head of Asian economics at HSBC Holdings Plc. “If households fail to step up their spending in the coming months, the authorities may be forced to loosen the reins on liquidity and investment spending to prevent a sharper deceleration in growth,” he added.

Beijing has pledged a gradual scaling back of the monetary and fiscal stimulus pumped into the economy last year, with no sharp turn in policy. Recent data shows a notable slowdown in credit in April, suggesting the exit might be materializing at a faster-than-expected pace. The central bank injected medium-term cash into the financial system Monday to match the amount falling due, a move largely expected by analysts.

China’s stock benchmark CSI 300 Index extended gains to as much as 1.9 per cent, with the data taming fears over tightening liquidity.

Iris Pang, chief economist for Greater China at ING Bank NV, said weaker retail sales data last month, driven by home appliances, cosmetics and jewelery, reflected seasonal factors -- such as consumers saving ahead of discounts offered by retailers during a national holiday in early May. A fall in the unemployment rate to 5.1 per cent in April from 5.3 per cent in March suggests a tighter labor market could continue to boost consumer spending.

While China’s economy has stabilized, its still challenged by an uneven pandemic recovery globally as well as a fragile basis for recovery at home, the National Bureau of Statistics said in a statement. A separate report from the NBS suggests the property market remains strong, with home prices rising at the fastest pace in eight months in April.

The nation’s top leaders recently described the recovery as “unbalanced and unstable,” pledging further efforts to drive a rebound in domestic demand. Sheng Laiyun, a vice head of the NBS, said earlier this month there’s still a gap between actual and potential growth, suggesting the recovery has still some way to go.

The recovery is expected to continue at least into 3Q, but domestic weakness remains a drag on the overall economy. External demand should remain a support, with rival exporters facing disruptions from virus resurgences. Domestically, China’s recovery is broadening, with demand and small private firms on the mend. Even so, the recovery in consumption is still not on solid ground, and remains vulnerable to another setback caused by sporadic virus outbreaks.

Industrial production remained robust on the back of a recovery in global demand, with fiscal stimulus and faster vaccine rollouts in developed economies helping to keep export growth strong. China’s steel and aluminum output in April blasted through previous records as Beijing’s efforts to rein in production and emissions foundered in the face of surging prices.

Despite a surge in exports and industrial profits, manufacturing investment remained weak in the first four months of the year, dropping 0.4% on a two-year average basis in April, suggesting that firms lack confidence about the future strength of the rebound.

Nomura Holdings Inc. sees a number of risks building in the second half of the year: export growth may slow as consumers in developed economies shift spending from goods to services; a resurgence in virus cases in developing nations could cut demand from those countries; surging raw material prices will weigh on spending; and curbs on property and local governments debt will impact investment.