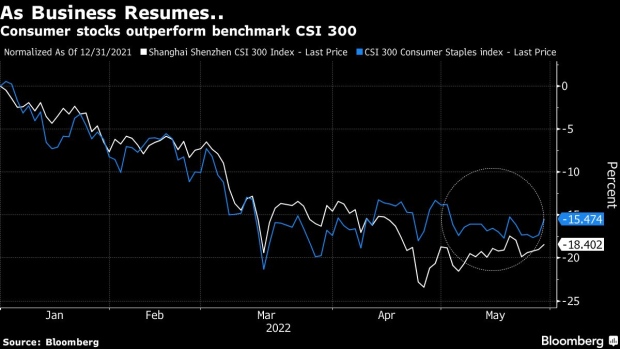 Tsingtao Brewery Co. and Chongqing Brewery Co. were among the biggest gainers on China’s CSI 300 Index, rallying at least 7% each. The benchmark gauge advanced up to 1% on Monday, led by consumer categories. It’s poised for the first monthly increase since February.

Strict movement restrictions in key Chinese cities have weighed on the nation’s economy and financial markets, drawing a dire warning from Premier Li Keqiang who urged officials to carry out stimulus. The latest relaxation in curbs and Shanghai’s moves to revitalize the economy should be positive for investor sentiment, though traders say much of the expected gains may have already been priced in.

Shanghai will loosen Covid test requirements for people who enter public places from June 1, while offering tax rebates for companies and allowing all manufacturers to resume operations. The plan also includes an accelerated approval of property projects and incentives for car purchases, among others.

Curbs on movement in several Beijing districts also started to be loosened over the weekend after authorities said the outbreak there was under control.

“Covid cases and lock downs have been the key factors holding back China equity valuations, so the easing of these will be positive,” said Bloomberg Intelligence analyst Marvin Chen. Continued reopening with more stimulus may kick start a recovery in the second half, he added.

Overseas investors have net purchased 1.1 billion yuan ($165 million) of A shares so far in May, while onshore traders have bought around HK$ 44 billion ($5.6 billion) of Hong Kong stocks.