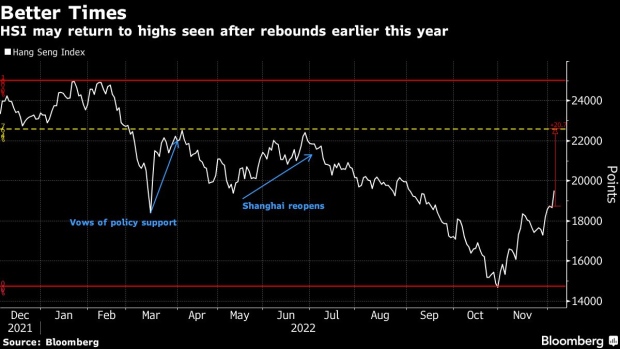 (Bloomberg) -- While China’s emergence from almost three years of pandemic isolation is paved with uncertainty, technical charts signal Chinese stocks may enjoy some smooth gains as the economy reopens.

The incremental easing of Covid restrictions in cities from Beijing to Hangzhou has brightened the outlook for Chinese stocks, and both onshore and offshore gauges may rise toward levels reached earlier this year when optimism over an end to lockdowns and an economic recovery drove gains.

Here are three charts to watch as restrictions are eased:

The Shanghai Composite Index looks set to repeat a rally that began in late April, when policy support and the lifting of Shanghai’s lockdown helped push the gauge to 3,400. Investors may eye a return to that level before their focus shifts to challenges including rising infection rates, economic growth and corporate earnings starting in late January.

The ChiNext Index has been more lackluster, with the tech-heavy gauge stuck in a trading range with highs capped at about 2,450 — where previous rebounds stalled. That level also marks the 23.6% Fibonacci retracement level of its slide that bottomed out in April, creating additional resistance. Further gains may be capped at the 50% Fibonacci retracement level, which coincides with the top of the summer rebound. The ChiNext may benefit the least from a reopening rally because the index is crowded with new energy names that were resilient during the pandemic, and investors perceive valuations as somewhat pricey.

The Hang Seng Index may also retest highs reached during rebounds earlier this year, with the psychological level of 22,000 shaping up as the first line of resistance, according to Richard Tang, equity research analyst at Julius Baer Group Ltd. That level is also the 76.4% Fibonacci retracement level of its slide earlier this year. The milestone, which would represent a 20% boost in valuations from levels late last week, may be reached before year-end, according to Tang.

--With assistance from Ishika Mookerjee.