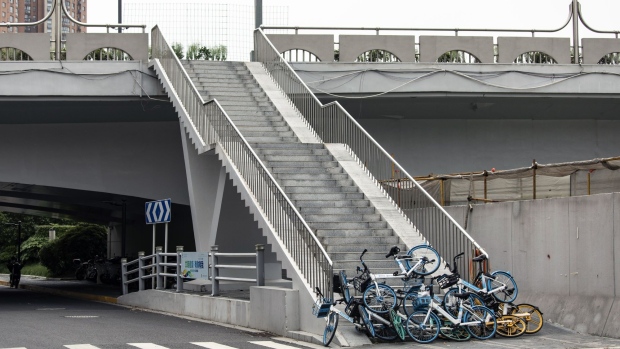 Shared bicycles form a temporary barricade at an entrance to a bridge during a lockdown in Shanghai. Source: /Bloomberg , Bloomberg

(Bloomberg) -- China’s general fiscal revenue plunged 41% in April as the government gave money back to taxpayers to help businesses weather the impact of Covid curbs that have weighed on the economy.

Government income from taxes and fees totaled 1.23 trillion yuan ($182 billion) in April, according to a Bloomberg calculation using official data, which was released Tuesday but did not break out the monthly figure from the year-to-date total.

Income for the first four months of the year was 7.43 trillion yuan, down 4.8% from the same period last year, the Ministry of Finance said in a statement. Revenue for this period would have increased 5% from a year earlier had it not been for the tax rebates, the ministry said.

In early March the government said it would provide tax relief this year worth about 2.5 trillion yuan, including 1.5 trillion yuan in rebates. That amount -- more than double that of 2021 -- was announced as the government sought to shore up an economy which was facing a housing market slump and an expected slowdown in export growth.

However since that support was announced, a spike in Covid cases and the lockdown of Shanghai and other cities has made financial aid even more necessary for businesses that are struggling with a massive dropoff in consumer spending and the disruption of supply chains.

Companies actively applied for tax rebates in April as the government’s rebate policy went into effect on a large scale, Xu Hongcai, a deputy finance minister, said at a briefing on Tuesday. Around 800 billion yuan in value-added taxes that had been collected previously were returned to taxpayers, exceeding the government’s expectations, he said. The drop in revenue in April was due to the “active fiscal policy” needed to tackle downward pressure on the economy, Xu said.

“It’s meant to benefit companies and boost market vitality at the cost fiscal income,” he said. “With the effects of measures coordinating Covid control and economic development kicking in, fiscal income will rebound steadily.”

However, there’s also evidence that slowing economic activity and the property downturn is denting the government’s coffers. The income from deed taxes, which are paid when a property is bought or sold, fell 27.4%, and the income from land sales tumbled nearly 30% in the first four months of 2022 compared to a year earlier, according to Bloomberg calculations based on the Ministry of Finance figures.

Tax revenue from vehicle purchases plummeted 28.3% in the first four months of 2022 from a year ago. The lockdown of Shanghai meant not a single car was sold there last month, and nationwide car sales fell the most in two years in April, down almost 36% from a year earlier to 1.06 million units, China Passenger Car Association data released last week showed.