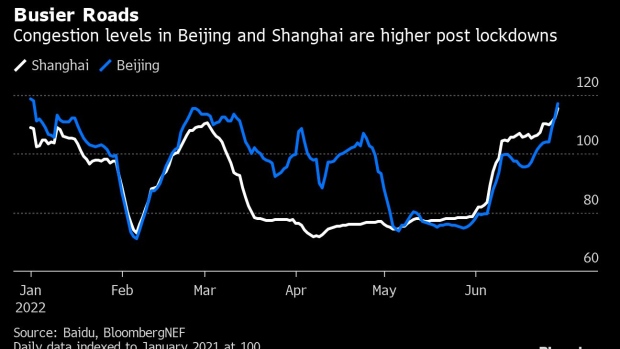 (Bloomberg) -- China’s demand for gasoline and diesel is nearing a return to pre-virus levels as the nation cautiously emerges from strict virus lockdowns.

Overall consumption of the major transport fuels last month was at almost 90% of June 2019 levels, according to people with direct knowledge of the nation’s energy industry. Gasoline and diesel account for about half of China’s total oil demand, and fuel use has steadily recovered after crumbling in April.

China’s rebound offers a potential boost to global crude demand, which could tighten the market further and drive prices even higher. However, the world’s biggest oil importer continues to face sporadic virus outbreaks and President Xi Jinping has reaffirmed that the nation will stick with its Covid Zero strategy, which relies on lockdowns and mass testing to stamp out infections.

Demand for gasoline and diesel rebounded quickly after the initial outbreak and lockdown in 2020, bouncing back to pre-virus levels. While flare-ups since then have tested fuel consumption, a resurgence earlier this year sparked by the omicron variant led to strict restrictions in some cities and crashing demand.

The pace of gasoline’s demand recovery could accelerate over the coming weeks as schools break for summer and more people get comfortable with driving across cities, the executives said. They added that diesel consumption had been impacted by heavy rain and heatwaves across the nation, affecting construction activity.

Traffic congestion last month in the 15 cities with the highest number of vehicle registrations was about 9% higher than January 2021 levels, according to BloombergNEF, which uses Baidu data. Figures also indicate a rebound in Shanghai and Beijing, which were subject to lockdowns recently.

There are some signs of improvement for aviation, but jet fuel demand is still lagging below pre-virus levels. Flight departures in June more than doubled from the downturn in early April, while the flight cancellation rate at China’s 20 biggest airports also eased, according to BloombergNEF.

China has cut the quarantine time for inbound travelers by half to seven days, but Chinese officials said the decision was not a sign of reopening and based solely on the shorter incubation period of the omicron variant.

“Oil demand is likely to register a year-on-year contraction in June and July, but demand growth could flip back into positive territory again if China succeeds in avoiding major containment fallouts,” said Fenglei Shi, the director of Greater China oil market midstream and downstream at S&P Global Commodity Insights.