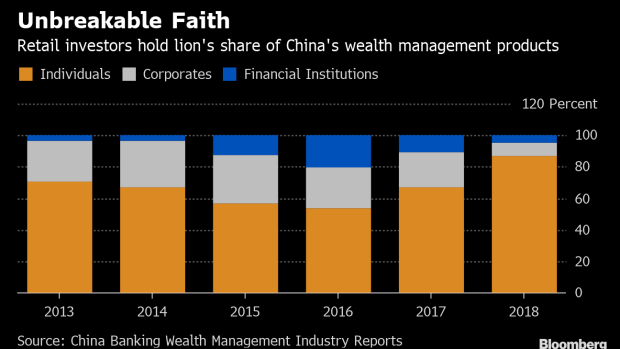 (Bloomberg) -- China’s savers are turning a deaf ear to government warnings about one of their favorite investments.

Individuals hold nearly 90 percent of instruments known as wealth management products, a record share, because many believe they’re shielded from losses -- a view officials have tried hard to discourage. The assumption of safety has been buttressed by the fact that the large banks that issue WMPs have at times dipped into their own balance sheets to protect investors from losses or even outright defaults.

That retail buyers have kept piling into WMPs even as corporate investors and financial institutions pared their exposure presents a quandary for Chinese policy makers preoccupied with controlling risks. While they want to stress that WMPs aren’t immune from losses to curb moral hazard, they must also avoid sparking a stampede for the exit among China’s millions of yield-hungry savers.

“Regulators face the tough task of having to educate investors about the risks without actually having these risks play out,” said Dexter Hsu, a Taipei-based analyst at Macquarie Research.

WMPs are issued by banks and typically offer yields of 3 percent to 5 percent, more than double that of one-year bank deposits. They can invest in anything from bonds and stocks to property.

Demand for WMPs boomed in recent years as palatable investment options narrowed amid a sluggish stock market and tighter curbs on moving money out of China. Policy makers have been trying put a damper on the market, with the chief banking regulator stressing that with high returns come high risks.

The changes seem to have done little to curb savers’ enthusiasm. While there’s no official data on the number of people who buy WMPs, industry reports show that small savers raised holdings to a record 19 trillion yuan ($3 trillion) last year. If anything, the crackdown seems to have driven away institutional investors even as individuals increased their exposure.

While issuers have until 2020 to comply with the new rules, some banks have started to market their WMPs based on fluctuations in their net asset value -- a better indicator of risk -- rather than an expected rate of return that can be interpreted as an implicit guarantee. Previously, when WMPs failed to meet advertised yields, banks would bridge the shortfall themselves rather than risk a hit to their reputation.

Even after the changes, savers’ perception of an implicit backstop may linger, in part because defaults are almost unheard of.

“If you just take all the WMP contracts at face value, you won’t find any clause that guarantees principal and interests,” said Meng Xiangjuan, an analyst at SWS Research Co. in Shanghai. “But in reality defaults are so rare.”

Spurred by the rule changes, banks are spinning off their wealth management units, a shift that should insulate their mainstay operations from any risks. Having a separate unit, rather than a consumer bank brand, offering the products could also help make it clear that investors can’t rely on being rescued from losses.

To contact Bloomberg News staff for this story: Jun Luo in Shanghai at jluo6@bloomberg.net;Jing Zhao in Beijing at jzhao231@bloomberg.net

To contact the editors responsible for this story: Sam Mamudi at smamudi@bloomberg.net, Jeanette Rodrigues