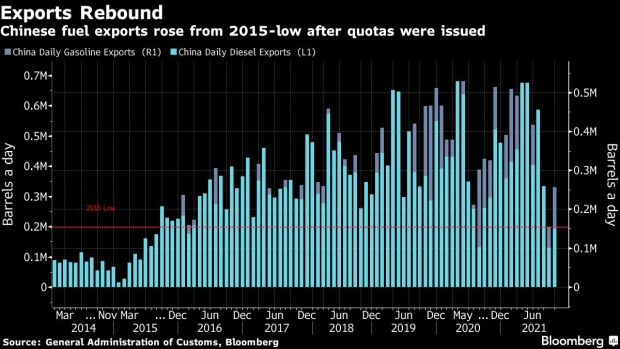 The largest publicly traded Panamax owner is Tianjin, China-based China Cosco, which has 69 in its fleet, Clarkson Plc data show. While Panamaxes are getting fewer U.S. grain cargoes, demand is rising for tankers exporting diesel, gasoline and other fuels. , Bloomberg News

(Bloomberg) -- China’s exports of diesel and gasoline rose in September from its lowest level since 2015, but the rebound could be short-lived as the nation struggles to secure sufficient energy and fuel ahead of winter.

Daily exports of gasoline climbed 67% from a month earlier to 256,067 barrels, while shipment of diesel rose 49% to 193,960 barrels, according to Bloomberg calculations based on data from General Administration of Customs.

Chinese refiners stepped up overseas shipments last month after obtaining additional export allowances. The trend, however, is unlikely to continue as domestic refiners rush to meet growing demand amid an energy crisis that’s led to a spike in prices of coal and gas. Diesel, specifically, is in very tight supply with Chinese wholesale prices at a 3-year high due to fuel substitution.

Gasoline and diesel stockpiles fell to their lowest in at least one year in the week to Oct. 14, according to data tracked by OilChem. Analysts expect Chinese refiners to import rather than export diesel should a colder-than-expected winter and persistent power shortage hit the country.