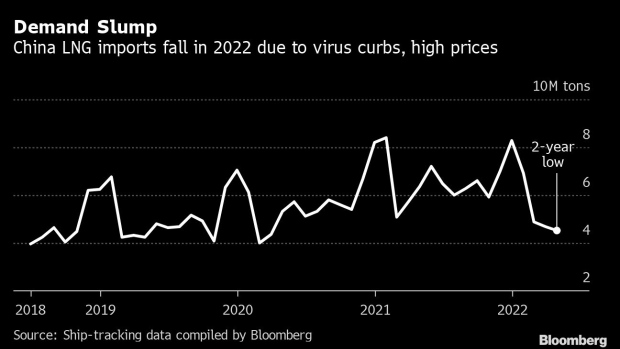 (Bloomberg) -- China is shopping around for liquefied natural gas shipments on speculation that easing virus restrictions will boost economic activity and demand for the super-chilled fuel.

After months of absence, some of the nation’s LNG importers are inquiring about buying cargoes for delivery from August onward, when demand is expected to rebound, according to traders with knowledge of the matter. Still, spot prices would need to fall further before executing any deal, they said.

Shanghai is starting to unwind stringent pandemic curbs that have been in place since March that carried heavy costs for the population and economy of the nation’s biggest city. China’s LNG imports fell almost 20% in the first four months of this year due to the government’s dogged adherence to zero tolerance policies for Covid, as well as high overseas spot rates.

Northern China -- which includes Beijing -- is still grappling with virus flareups, and LNG traders expect demand to remain subdued through August. While the demand outlook looks better in Southern and Central China by the end of the summer, traders are still cautious since gas consumption hasn’t yet rebounded.

Buyers are also in no immediate rush, and won’t lock in deals unless prices fall further. Importers won’t purchase spot LNG cargoes unless rates drop below about $17 per million British thermal units, according to traders. The Japan-Korea Marker, the benchmark spot rate for the region, was assessed on Tuesday around $20, the traders added.

LNG spot rates surged to a record in March after Russia invaded Ukraine, exacerbating a global supply crunch. The rally led Chinese companies to significantly cut purchases because it was uneconomical to procure expensive shipments for sale into the regulated domestic market.