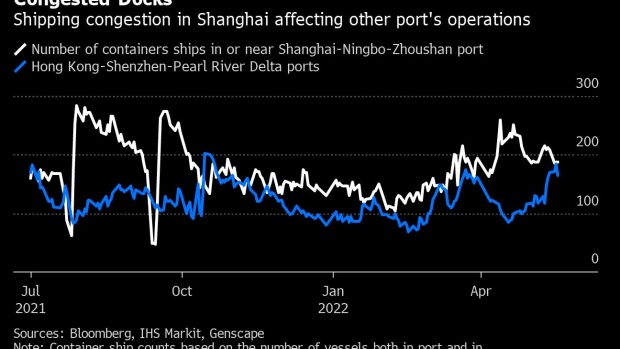 (Bloomberg) -- Chinese renewable power companies are poised to benefit from the European Union’s plan to cut its reliance on Russian energy.

Some of China’s, and therefore the world’s, biggest solar manufacturers, such as Longi Green Energy Technology Co. and Jinko Solar Co., have been forced to divert panels away from the US as shipments get snarled up in trade frictions with Washington. That’s left the EU, where there are no such obstacles, as the single largest market for Chinese firms, accounting for 46% of exports in 2021, according to Morgan Stanley.

That’s likely to rise after the 210 billion-euro ($220 billion) plan announced by the EU on Wednesday, which centers on cutting red tape for wind and solar farms and paving the way for renewables to make up an increased target of 45% of the bloc’s energy needs by 2030.

Morgan Stanley sees module makers like Longi as among key beneficiaries of the EU’s move, according to a note from the bank, and the Chinese company’s shares rose on Thursday. The stock is also favored along with Trina Solar Co. by Daiwa Capital Markets, which cites their high proportions of overseas sales.

China is gradually easing its lockdown of Shanghai, but that won’t bring immediate relief to global supply-chain congestion, according to Ocean Network Express. Shortages of rail, port and trucking workers in China and the US still need to be resolved as they’re delaying ships at the world’s major ports.

China’s Covid caseload is easing, though the threat of lockdowns remains as infections are found in key cities and the country continues to have zero tolerance for any outbreaks. Chinese Premier Li Keqiang told local governments to “act decisively” on measures to support growth in the coming weeks in an effort to get the economy back on track as soon as possible.