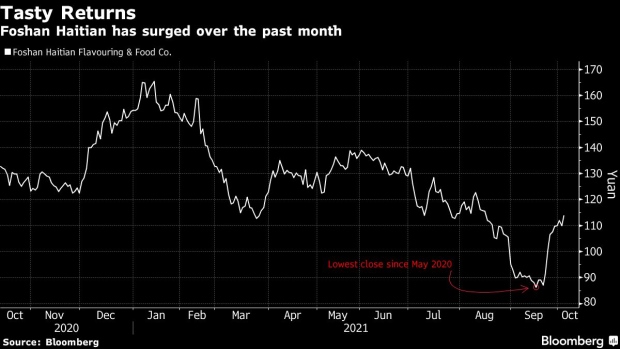 The company plans to increase the prices of soy sauce, oyster sauce and other products by 3%-7% from Oct. 25, as the costs of raw materials, transport and energy continue to increase, the Shanghai-listed company said in an exchange filing dated Wednesday, adding that the hike is aimed at making its business more “sustainable.”

A global commodities boom has added to inflationary pressure in the world’s second largest economy, pushing China’s factory-gate inflation to a 13-year high and threatening to squeeze profit margins of many industrial and consumer companies.

The official Shanghai Securities News reported Tuesday that China’s factory-gate inflation may have continued to accelerate in September, with producer prices expected to rise more than 10%. However, consumer inflation may have slowed because of lower pork prices, it said.

Shares of Haitian, with a total market value of $74.6 billion, have surged 32% since mid-September, even as the CSI 300 Index of key companies in Shanghai and Shenzhen was basically little changed. The stock has 32 buy ratings and six holds from brokerages tracked by Bloomberg, with no sells.