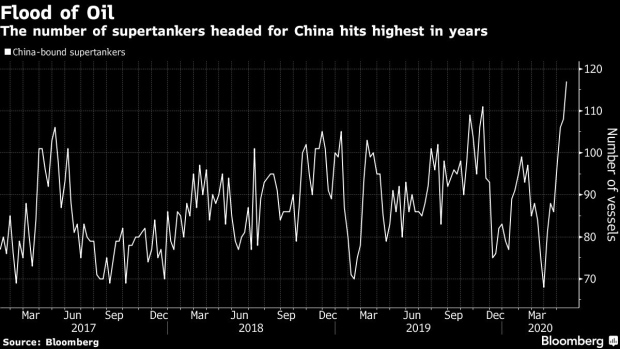 That, at least, is one conclusion from the movements of the world’s supertankers.

There are 117 of the industry’s largest crude carriers en route to ports in the Asian country, where there have been increasing signs of a pickup in oil demand following the outbreak of coronavirus. That’s the biggest number of the vessels since at least the start of 2017, and quite possibly ever. Assuming they have standard-sized cargoes on board, the ships are likely delivering at least 230 million barrels of cargo.

The surge in flows is just another piece of evidence underpinning the idea that the country’s oil consumption is recovering at a time when many other nations are still struggling to ease lockdown measures as they combat Covid-19. China’s apparent oil demand surged by roughly 11% from March into April, and the nation’s independent refineries are processing at a record rates.

“Chinese purchases are done on geopolitical grounds and pricing ground,” said Peter Sand, the chief analyst at shipping trade group BIMCO. “The stars aligned for perfectly in 2nd half of April.”

Many of the shipments, due to arrive between now and mid-August, are likely to have been purchased last month, when oil prices briefly plunged toward zero because of a huge global overproduction of crude. U.S. barrels traded at negative prices last month amid concern about a lack of space to store supplies while, across the world, physical grades also became steeply discounted.

China’s apparent oil demand rose to 11.81 million barrels a day in April, up from 10.63 million in March, according to data compiled by Bloomberg. That means the vessels en route will deliver almost 20 days of supply.