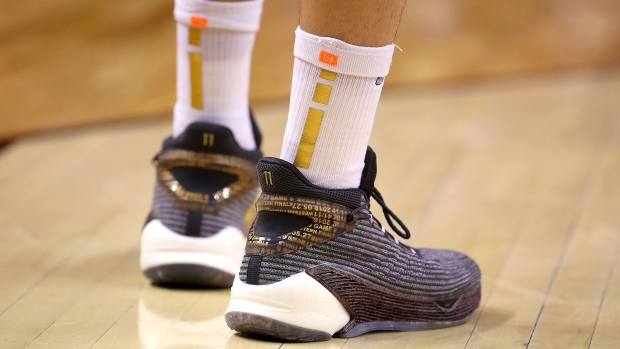 TORONTO, ONTARIO - JUNE 10: A detail view of the Anta KT4 Pro Game 6S worn by Klay Thompson #11 of the Golden State Warriors in the second quarter against the Toronto Raptors during Game Five of the 2019 NBA Finals at Scotiabank Arena on June 10, 2019 in Toronto, Canada. NOTE TO USER: User expressly acknowledges and agrees that, by downloading and or using this photograph, User is consenting to the terms and conditions of the Getty Images License Agreement. (Photo by Gregory Shamus/Getty Images) , Photographer: Gregory Shamus/Getty Images North America

(Bloomberg) -- The bigger Anta Sports Products Ltd. becomes, the more vulnerable it feels. That’s the tight rope China’s largest athletic-apparel producer is walking as it expands beyond the Asian nation amid the trade war.

“In the past, Anta only focused on the China market and felt little impact,” Lai Shixian, Anta’s chief financial officer, told Bloomberg in Hong Kong. But now with its product sales and supply chain spread all across the globe, “the trade war is having a massive impact on all fronts.”

Anta’s global ambitions come at a tricky time, as an intensifying tit-for-tat tariff war is making it more expensive to manufacture in China -- long considered the world’s workshop. The sportswear maker struck a $5.2 billion deal to acquire Finland’s Amer Sports Oyj in December to boost its overseas business.

The Fujian-based firm already has suppliers in Southeast Asia, according to Lai. If Anta keeps improving its operations, the impact of the trade war could “still be controlled at this point,” he said.

While the trade war has reduced orders for Chinese factories, it has given local brands including Anta more sourcing choices. But Anta’s choice for sourcing partner will not be a simple function of cost, Lai said. Other parameters such as quality and delivery period will also be considered.

Investors have so far cheered Anta’s acquisition of Amer, the maker of Salomon ski boots and Wilson tennis rackets. It reported first-half revenue of 14.8 billion yuan ($2.1 billion) on Monday that beat analyst estimates. The stock has climbed 63% this year while the broader gauge Hang Sang Index slipped 0.6%.

To contact the reporter on this story: Jinshan Hong in Hong Kong at jhong214@bloomberg.net

To contact the editors responsible for this story: Rachel Chang at wchang98@bloomberg.net, Bhuma Shrivastava, Jeff Sutherland