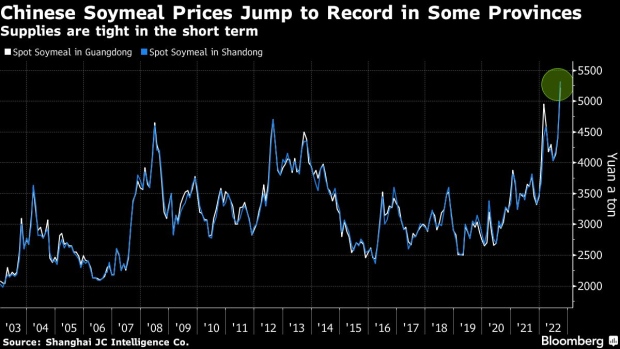 A wheel loader moves soybean meal produced by Glencore Plc as it is stored before transportation in a grain flat storage at the European Bulk Services (E.B.S.) terminal at the Port of Rotterdam in Rotterdam, Netherlands, on Tuesday, April 25, 2017. Since taking over Glencore Agriculture in 2002, Chris Mahoney has overseen the transformation of the unit into a standalone enterprise that generates more revenue from owning fixed assets in strategic locations than simply trading. Photographer: Simon Dawson/Bloomberg , Bloomberg

(Bloomberg) -- China is facing a soybean meal shortage, at least in the short term, with prices of the feed ingredient soaring to a record in some provinces.

Spot prices have jumped as much as 10% this week in the main processing hubs of Guangdong and Shandong, according to data from Shanghai JC Intelligence Co. The rally could drive up feed costs for hog farmers and spur a further run-up in pork prices that Beijing is trying to cool amid inflation risks.

Traders are scrambling for the feed ingredient, with some saying there’s no guarantee that those who have placed orders can secure supplies. The main reason for the shortage is weak imports of soybeans as demand languished. China’s soybean imports fell 9% in the first eight months from last year.

An improvement in demand also helped drive up soybean meal prices, said Rosa Wang, an analyst at JCI. Pig farmers tend to fatten their herd during this period to meet seasonally higher demand for pork products in winter.

More supplies are arriving but will take time. Chinese importers have stepped up soybean purchases in recent weeks, notably from Argentina. The US harvest is also just starting, which will ease supply tightness in the coming months.

China will receive 6.8 million tons of soybeans in September, 5 million tons in October and 8.8 million in November, consultancy Mysteel Group estimates. The soybeans are crushed to produce meal for animal feed and oil for cooking.

The nearby shortage is reflected in the backwardation on the Dalian Commodity Exchange. Soybean meal for November delivery is priced at 4,667 yuan ($657) a ton, about 600 yuan more expensive than January, the most active contract.