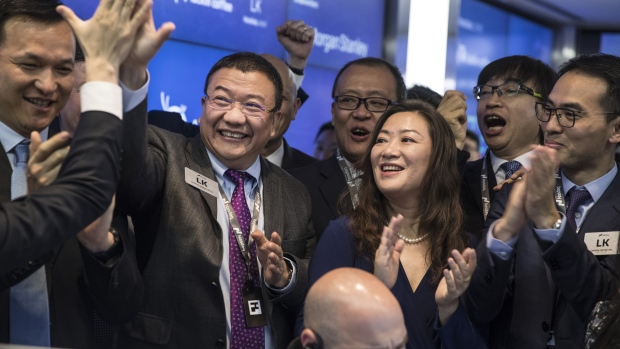 (Bloomberg) -- The team behind Luckin Coffee Inc. is betting that what worked for them in car rentals will prove a success with java. Their $130 million annual cash burn -- and rival Starbucks Corp.’s dominance in the Chinese coffee market -- makes it a risky proposition.

For now, American investors seem impressed enough by Luckin’s aggressive expansion plan for the Xiamen-based company to raise a higher-than-expected $561 million in its initial public offering Thursday. The stock jumped 20% to $20.38 in New York on Friday, compared with a decline in the S&P 500 Index.

Reinout Schakel, the company’s chief financial officer, said he was pleased with the trading debut.

“Up is always better than down,” he said in an interview.

The Chinese startup is seeking to overtake Starbucks, opening more stores in two years than the industry giant has in 20 years. At stake is a $5.8 billion market where coffee consumption is only in its initial stage and has the potential to explode.

To achieve that goal, Luckin Chairman Lu Zhengyao and Chief Executive Officer Qian Zhiya are employing a strategy they used with CAR Inc. more than a decade ago: burning money from investors to quickly grab market share from rivals. That may be a common tactic for a Chinese Internet-driven startup, but it’s unusual for a beverage company.

For one, the barriers to entry are much higher with car rentals than with quick, convenient coffees. While Luckin is hoping that rapidly creating a network of delivery kiosks and pick-up points in office buildings for Chinese urbanites to grab their caffeine fix will give them a head start, there’s little to stop other established networks such as convenience-store chains from offering the same.

“The overall food and beverage industry is fully competitive with low customer loyalty, as there are too many options,” said Jason Yu, Shanghai-based general manager of Kantar Worldpanel in Greater China. “Customers face no switch cost if they want to change to another coffee brand, or just choose another type of drink.”

The listing price of $17 a share made Luckin one of the 10 largest IPOs in the U.S. this year. The offering topped earlier expectation that it could raise about $300 million.

Luckin, whose backers include BlackRock Inc., reported a net loss of $241 million for 2018 as operating expenses outstripped revenue, and the company has said it may continue to see losses in the future. Schakel declined to say when the company might be profitable.

Luckin’s strategy is copied directly from the management team’s previous car rental venture. Lu founded CAR Inc. in 2007 and set on an aggressive plan to purchase autos and expand its service-store network, with hefty spending on advertisements and discounts such as free first-day service for new customers. By 2014, it had built up a rental-car network with more vehicles than the other nine top firms in China combined.

Similarly, Luckin is pulling in Chinese consumers with generous discounts: first-time users get a cup of coffee free and six 50% discount vouchers. The model works because of the company’s technology, which helps keeps labor and other costs down, Schakel said.

“Restaurant margins at Luckin are negative 50%. At Starbucks in China, they are about mid-30% positive,” said Anthony Massaro, partner at Pershing Square Capital Management, an investor in Starbucks. “We just don’t think that a model where each box loses money each year is sustainable.”

He added that the two products are different as Starbucks aims to be a premium brand in China while Luckin is positioned for the masses.

“There’s no prestige to walking down the street with a Luckin coffee cup as there is for consumers with the Starbucks’ brand,” he said.

--With assistance from Craig Giammona and Lisa Wolfson.

To contact the reporter on this story: Daniela Wei in Hong Kong at jwei74@bloomberg.net