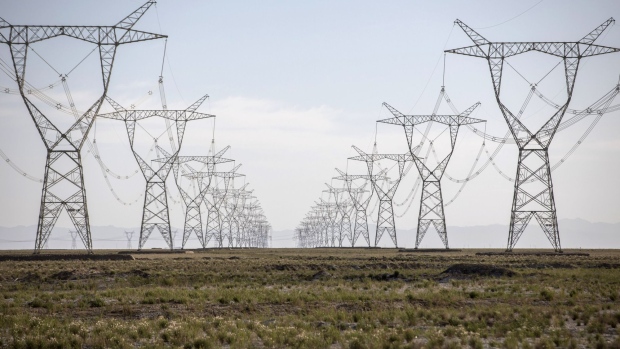 Power lines carrying electricity from the Golmud Solar Park hang from transmission towers on the outskirts of Golmud, Qinghai province, China, on Wednesday, July 25, 2018. China has emerged as the global leader in clean power investment after it spent $127 billion in renewable energy last year as it seeks to ease its reliance on coal and reduce smog in cities, according to a report jointly published by the United Nations and Bloomberg New Energy Finance in April. , Bloomberg

(Bloomberg) -- State Grid Corp. of China is nearing an agreement to acquire a 49% stake in Oman’s state-owned transmission company in the first major privatization by the Middle East’s largest non-OPEC oil producer, people with knowledge of the matter said.

The Beijing-based company will acquire the stake in a deal that values Oman Electricity Transmission Co. at about $2 billion, the people said, asking not to be identified as the matter is private. Talks are advanced and the two parties are expected to reach an agreement as soon as Sunday, the people said.

The privatization attracted interest from large international investors and is the largest in size in the country’s electricity sector, the people said. The nation’s Nama Holding would retain a controlling stake in Oman Electricity after the transaction, the people said.

A potential deal will be a landmark for the Gulf Arab monarchy as it embarks on asset sales of government-owned entities to plug one of the largest budget deficits among oil exporters. The deal is also a sign of China’s rising interest in the Middle East amid plans by President Xi Jinping to increase the nation’s political clout and revive ancient trading routes under his “One Belt, One Road” initiative.

Oman has one of the biggest budget shortfalls of all the sovereigns tracked by Fitch Ratings. The Gulf Arab monarchy’s finances have been hurt by lower oil prices, pushing the government to consider alternative sources of funding. It has been raising money from international debt markets to plug the deficit.

Oman Electricity owns and operates the nation’s main transmission network. The company, which is a subsidiary of Nama Holding, posted profits of 23 million rials ($60 million) for the first half of the year, compared with 17 million rials for the same period last year, according to information on its website.

To contact the reporters on this story: Dinesh Nair in London at dnair5@bloomberg.net;Vinicy Chan in Hong Kong at vchan91@bloomberg.net

To contact the editors responsible for this story: Aaron Kirchfeld at akirchfeld@bloomberg.net, Andrew Davis