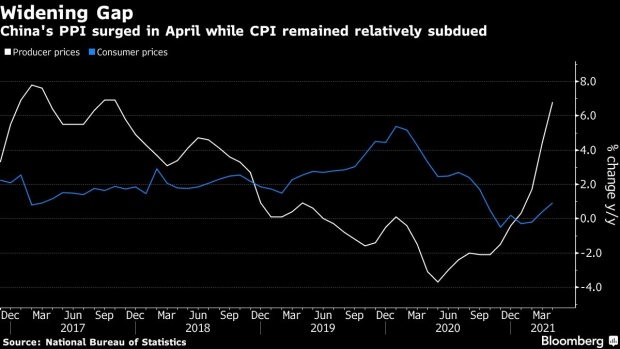 (Bloomberg) -- China’s factories, power plants and farms are fielding the worst effects of a surge in commodity costs that’s yet to hurt the wallets of the nation’s citizens.

Electronic goods makers are balking at the volatility in raw materials prices and are cutting orders for rods and pipes, said Henan Qixing Copper Co. That’s a double blow for the supplier of metal parts, which is already dealing with soaring refined copper prices.

“It’s a big test of the company’s capital,” said Hai Jianxun, a sales executive at Qixing, a mid-sized copper fabricator in China’s industrial base. This situation “requires much more capital to keep the business running.”

China’s government has intensified its efforts to rein-in commodity prices to help these industries weather what it hopes will be a transitory bout of inflation. Rhetorical intervention by top politicians, state planners and exchanges have had some success in forcing prices lower from the all-time highs hit earlier this month. But for many in the supply chain, the money woes are mounting up.

At a recent visit by Premier Li Keqiang to the city of Ningbo on the east coast, one home electronics manufacturer complained that higher raw materials prices had put huge pressure on its operations. Another -- a copper valve producer -- lobbied the premier for more government support.

While producer price inflation (PPI) has jumped, consumer prices -- which are what the central bank really cares about when calculating monetary policy -- have remained more subdued. Keeping it that way depends on the supply chain absorbing rising costs and not passing them on to consumers.

Factories, and the power plants that supply them, are also particularly vulnerable to elevated coal prices. With China’s economic revival pushing power consumption to exceed pre-pandemic levels, and drought in the south of the country causing a drop in hydro-power, energy costs are a growing headache.

The strain on electricity supplies has already forced some factories in the southern industrial heartland of Guangdong to shift their operations to off-peak hours, said Yu Zhai, an analyst at Wood Mackenzie Ltd. Others are only being allowed to operate three days a week, hurting their ability to fulfill orders, news website Jiemian reported. Such measures to stagger power consumption could last three months.

Coal at the port of Qinhuangdao costs 865 yuan a ton, about 50% higher than average. When prices are above 800 yuan a ton, nearly all coal-fired power plants in China lose money, said Yu. “Some plants may try to reduce generation to avoid more losses,” he said.

Farmers big and small are also suffering. Investors have punished the shares of the largest hog producers, which are facing a squeeze on margins from higher feed costs -- including corn, soybeans and wheat -- even as pork prices slump.

Muyuan Foods Co., China’s biggest pig breeder, said costs are increasing due to higher raw material prices. The timing couldn’t be worse, with futures prices for live pigs in China falling to the lowest since the derivative launched earlier this year.

And the spike in grain markets is hurting even the producers who should benefit from higher prices.

Liu Chen, a corn farmer in Heilongjiang province in the northeast, said land rents and labor costs have jumped by about half, while fertilizer prices have risen 20%, amid the run-up in domestic corn prices, which peaked at the start of the year.

“With current corn prices heading lower, it’s very likely that we will lose money by the time harvest comes around,” Liu said.