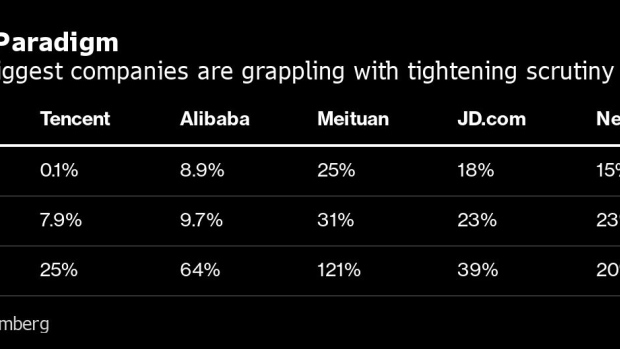 An employee walks through the campus of the Ant Group Co. headquarters in Hangzhou, China, on Wednesday, Jan. 20, 2021. Ant Co-Founder Jack Ma resurfaced for the first time since China’s government began clamping down on his business empire nearly three months ago, appearing in a live-streamed video that sent Ant affiliate Alibaba Group Holding Ltd.'s stock soaring but left plenty of unanswered questions about the billionaire’s fate. Photographer: Qilai Shen/Bloomberg , Bloomberg

(Bloomberg) -- On trading floors in New York and Hong Kong, the brightening mood toward Chinese technology companies is unmistakable: With stocks like Alibaba Group Holding Ltd. and Tencent Holdings Ltd. surging from multi-year lows, talk of a new bull market is growing louder.

Yet speak to executives, entrepreneurs and venture capital investors intimately involved in China’s tech sector and a more downbeat picture emerges. Interviews with more than a dozen industry players suggest the outlook is still far from rosy, despite signs that the Communist Party’s crackdown on big tech is softening at the edges.

These insiders describe an ongoing sense of paranoia and paralysis, along with an unsettling realization that the sky-high growth rates of the past two decades are likely never coming back.

Alibaba and Tencent are expected to deliver single-digit revenue growth in 2022, a letdown after years of rip-roaring expansion. One prominent startup founder said he’d pass on money from those companies because of the attention it would attract. Another said his company is proceeding on the assumption that it’s only a matter of time before officials double down again.

A third Beijing-based entrepreneur recently sold his stake in a tech unicorn and said he’s reluctant to start a new venture until there’s more clarity on what the government will allow.

“China’s tech crackdown has happened. There is no comeback from that,” the entrepreneur said, asking to remain anonymous for fear of retribution. “The regulatory pressure on Chinese tech companies may have hit the brakes for now, given the sluggish economy, but it’s unthinkable that regulators in the country would loosen their grip on platform companies ever again.”

On the face of it, China’s $1 trillion internet industry is finally emerging from a brutal reckoning. Jack Ma’s embattled Ant Group Co. is poised to revive a long-derailed initial public offering. Scores of new video games were recently greenlit for app stores. And after a sweeping data security probe, Beijing may soon let ride-sharing company Didi Global Inc. off with a mere fine.

During conference calls over the past few weeks, top executives proclaimed a new era in which they could once again focus on building products and delivering profits. Take Koolearn Technology Holding Ltd., an online education operator that was nearly wiped out last summer when the government banned for-profit tutoring companies. After its push into e-commerce went viral on social media, the company’s shares doubled during a single day of frenzied trading on June 13.

Beijing has “gradually begun to release some policy signals,” Xin Lijun, retail chief of e-commerce giant JD.com Inc., told Bloomberg Television. But “a return to the past days of ‘riding the horse without holding the reins’ is not very likely.”

Beijing has a long tradition of clamping down ahead of important events. This year’s upcoming party congress — when Xi Jinping is expected to win an unprecedented third term — is about as significant as it gets. Some worry that the government is merely loosening the leash temporarily to spare an economy devastated by coronavirus curbs and high global inflation.

“I do feel that there is starting to be some signs of regulatory easing, and truthfully over the last few years, we did see some of this ‘barbaric growth,’” said Guo Changchen, founder of Keeko Robot Technology, a Xiamen-based artificial intelligence education startup. “As long as there are regulations and those regulations are clear, then we can work on our development within this system.”

Founders say a maze of government regulations introduced in 2021 have made their lives difficult. The rules govern everything from the platform economy to what kinds of entertainment are permissible on social media. Scrutiny over practically every facet of the industry has led to a chilling effect. US money, which vanished during the clampdown, shows no sign of returning. JPMorgan was among the Wall Street institutions that — for a time — called China “uninvestable.”

Putting aside this year’s stock rally, China is still weathering a decline in venture capital investments, despite once being touted as a primary rival to Silicon Valley. The value of deals in the country fell roughly 40% from a year ago to $34 billion in the first five months of 2022, according to data from the research firm Preqin. Meanwhile, venture capital and private equity funds raised $6.2 billion, a fall of more than 90% compared to the first five months of last year.

Even apparent beneficiaries of China’s easing of rules face a rocky climb. Although regulators greenlit Baidu Inc. to release new games starting from April, the company has shelved its game development and publishing arms and downsized staff, according to a person familiar with the matter. That means one planned game — “The Advancing Rabbit” — will likely never get released.

Of the 105 gaming firms that obtained new licenses since April, at least 11 are no longer operating normally, according to a Bloomberg News analysis of company records available on registry tracker Qichacha. Some studios dissolved their companies. Others took down their websites or re-purposed them for things like job and rental listings.

Creative choices are still heavily policed. In February, Shanghai outfit Lilith Games canceled a new mobile game after deciding its anime-style graphics were unlikely to get past regulators, according to a person familiar with the matter. Chinese censors have a low tolerance for what they consider lewd imagery — such as the more sexualized or explicit iconography popular in Japanese anime.

“The licensing hiatus has triggered layoffs and streamlining among game developers across the board,” says Jesse Sun, a headhunter with Shanghai-based consultancy Gamehunter. “It’s a dead-end for many small and medium-sized studios.”

Why China Keeps on Targeting Its Technology Giants: QuickTake

Even in a best-case scenario, China’s once-swaggering tech titans are now effectively utilities eking out single-digit growth. Many are afraid to pursue moonshots in an age of knee-jerk regulation.

Ant is unlikely to ever again pull off history’s largest IPO. Didi has dialed back its overseas expansion. And Tencent and Alibaba say they’ll focus on safer, familiar bets like social media and online commerce while gradually ceding the lead in yet-to-be disrupted arenas like fintech.

The founder of a farming startup said he recently asked an investor whether his money counted as “disorderly expansion of capital.” Without spelling out its scope, President Xi has used the term to explain why regulatory oversight of tech moguls is necessary.

“That investor couldn’t answer,” the founder recalled. “In fact, no one knows the answer.”