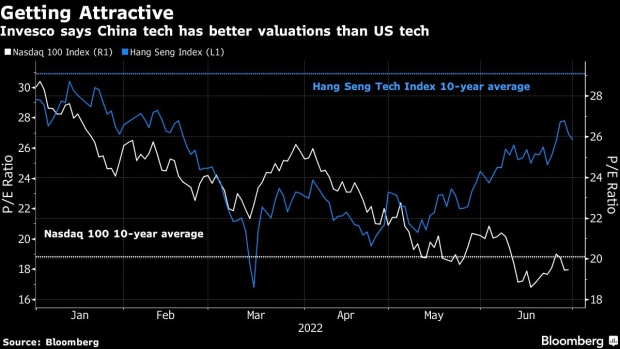 Pedestrians reflected in an electronic screen displaying an illustrative chart in Hong Kong, China, on Tuesday, March 15, 2022. Chinese stocks suffered another deep selloff on Tuesday as concerns about the country’s ties with Russia and persistent regulatory pressure sent shares on a downward spiral. , Bloomberg

(Bloomberg) -- China is the best place to buy tech stocks as valuations in the US remain too high to be attractive, according to Invesco Ltd.

Beijing’s crackdown on everything -- from tech to property and online education -- sparked a year of heavy selling that wiped out almost $2 trillion from the Hang Seng Tech Index at the height of the rout. That’s now reversing as loose monetary policy and an improving growth outlook outweighs concerns about the country’s Covid Zero policy, the firm’s Global Head of Asset Allocation Research Paul Jackson said in an interview.

The slump “opened up a valuation point where the market is trading in a low range historically and, in absolute terms, at almost half compared to the US,” said Jackson at Invesco, which oversees about $1.45 trillion in assets. “If you’re going to buy tech stocks, it’s best to do so in China.”

Equities in the world’s second-largest economy have outperformed the US and Europe in recent weeks as pandemic restrictions are relaxed, while the Hang Seng index of Chinese tech shares has surged 12% this month as authorities signaled a more lenient stance toward the sector. Invesco’s optimism adds to bullish calls on China tech from JPMorgan Asset Management, Morgan Stanley and Jefferies Financial Group.

Even after recent gains, China’s tech stocks are still cheap compared to historical averages, with the Hang Seng Tech index trading at 27 times its forward price-to-earnings ratio compared with a 10-year average of 32 times, according to data compiled by Bloomberg. The Nasdaq 100 is trading at nearly 20 times on the same basis, about in line with its historical average.

The outlook for stocks in Europe and the US is less rosy, according to Invesco. “Usually when markets dip it’s time to buy, but that feels uncomfortable now that we are getting so close to a recession,” Jackson said. As a result, he is slightly underweight equities and overweight sovereign debt for the first time since 2016.

Central banks from the US to Australia are struggling to curb soaring inflation even with aggressive interest rate hikes. That’s left tech stocks particularly battered and most major economies facing potential recessions. Equity markets in general are buckling under the weight of these worries, with the S&P 500 on course to post its worst first half since 1970.

Though Jackson is impressed by how well earnings have held up so far, rising commodities costs and wages are pressuring margins. “I’ll be surprised if we continue to see the corporate sector sailing through,” he said.

While the wider technology industry in the US appears overpriced, profitability at Big Tech firms including Alphabet Inc. looks more secure because they are less labor-intensive and have fewer costs as a result, Jackson added. The same applies to health care firms, he said.