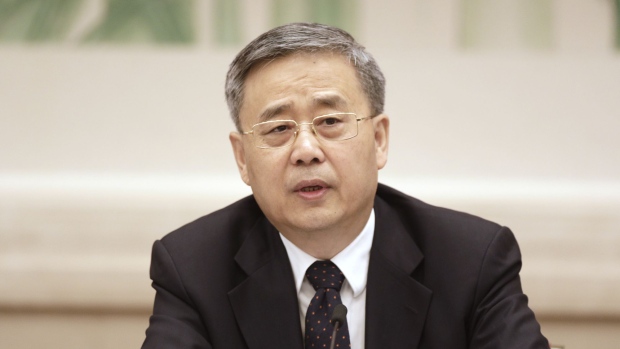 Attendees use smartphones at the World Artificial Intelligence Conference (WAIC) in Shanghai, China, on Thursday, July 8, 2021. The conference runs through to July 10. Photographer: Qilai Shen/Bloomberg , Bloomberg

(Bloomberg) -- China’s top financial regulator said he expects to achieve significant progress in the ongoing crackdown on fintech firms before the year-end, reinforcing speculation that Beijing’s campaign to rein in its tech giants may be receding.

Authorities had identified more than a thousand issues relating to the fintech operations of 14 internet platforms, China Banking and Insurance Regulatory Commission Chairman Guo Shuqing told state broadcaster CCTV on Wednesday. The companies have responded positively to the feedback and about half of the proposed rectifications have already been implemented, he said, adding that he expects “even more significant progress” before the end of the year.

Still, Guo vowed to implement strict regulations and break up monopolies, saying that unfair competition continues to persist in some areas of China’s financial industry.  The country has “zero tolerance” for illegal financial activities, the regulator said.

Investors have seized on any sign that the nearly one-year-old crackdown in China is entering its final stage and snapping up beaten-down tech stocks in recent weeks. A smaller-than-anticipated fine for food delivery giant Meituan earlier this month, as well as a Dow Jones report Thursday suggesting that the cybersecurity agency is wrapping up its probe into Didi Global Inc., have added to the optimism. The Nasdaq Golden Dragon China Index that tracks U.S.-listed Chinese stocks is on track for its best month in a year.

“The regulatory crackdown is coming to an end, probably over the next few months, and the valuations of Chinese stocks are very inexpensive and attractive, especially for tech stocks,” Tom Masi, a portfolio manager at GW&K Investment Management, said earlier this week.