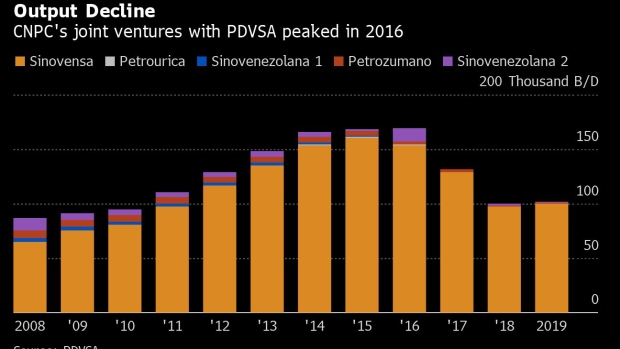 Once a major investor in the OPEC nation, China National Petroleum Corp. is sending engineers and commercial staff there and vetting local companies for maintenance work at an oil-blending facility it operates with Petroleos de Venezuela SA, according to people with direct knowledge of the firm’s actions, who asked not to be named because the information isn’t public. CNPC is also contacting local service providers to potentially boost crude output at five other ventures with the Venezuelan state producer, the people said.

Tighter U.S. sanctions against Maduro’s regime and oil-market turmoil in the past few years have left Venezuela isolated and without much-needed foreign investment to sustain production. The country is now trying to recover with legislation that would give international partners more control over operations.

While CNPC’s moves are still preliminary, they are the first signs that one of Venezuela’s most important international partners is considering returning to the country in earnest after two years of scant investment. The Chinese producer has yet to take key steps, such as signing procurement or service contracts with local firms.

U.S. sanctions may be a deterrent. While Maduro’s government is hopeful U.S. President Joe Biden may be softer on Venezuela than his predecessor, it’s unclear if the White House will ease policies that ban most business with PDVSA. Biden’s administration has so far been reluctant to engage with the authoritarian leader.

For Maduro, CNPC would be an important investor as he seeks to triple the country’s crude production by the end of this year. Venezuela, which holds the world’s largest oil reserves, saw production plunge as international partners left. Current output of about 500,000 barrels a day is about a sixth of peak production in 2008.

CNPC was one of the largest foreign players in the country as recently as 2016, when it was producing about 170,000 barrels a day, according to PDVSA data. Its output had tumbled 75% as of July, after U.S. sanctions made it harder to do business in the country and PDVSA’s financing dried up.

In 2019, one of CNPC’s units halted work to expand the blending facility’s capacity, citing “the extremely difficult situation” of the project. Months before, Maduro had pledged to produce 1 million barrels “only for China,” after a visit to the country.

Aiming to lure investment, Venezuela’s government-controlled National Assembly is drafting an energy law that would allow foreign companies to own a controlling stake in joint ventures they operate with PDVSA. The proposal has been met with some resistance, and it’s unclear when the bill will come up for a vote in the legislature.

New rules, coupled with higher oil prices, could make Venezuela a “profitable place to restart works,” said Francisco Monaldi, an expert on Venezuela’s oil industry at Rice University. “It will not be the beginning of a gigantic production stage, but rather CNPC returning to a production level of more than 100,000 barrels” a day, which would help PDVSA repay debt, he said.

Nearly all of CNPC’s production is likely to be exported back to China, helping pay for Venezuela’s debt with the Asian nation. Since 2008, Beijing has lent the country about $60 billion to be repaid in part with crude oil shipments.

The debt has been restructured as Venezuela’s finances deteriorated, and it now stands at about $19 billion, according to Ecoanalitica, a consultancy in Caracas.