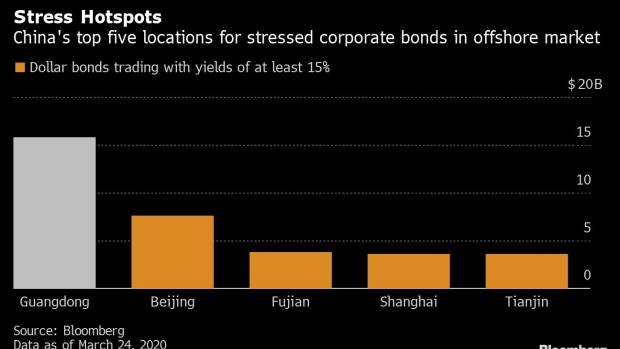 A U.S. one-hundred dollar banknote and Chinese one-hundred yuan banknotes are arranged for a photograph in Hong Kong, China, on Monday, April 15, 2019. China's holdings of Treasury securities rose for a third month as the Asian nation took on more U.S. government debt amid the trade war between the world’s two biggest economies. Photographer: Paul Yeung/Bloomberg , Bloomberg

(Bloomberg) -- Guandong is now home to the highest amount of stressed corporate dollar debt in China.

With almost $16 billion of bonds yielding at least 15%, firms headquartered in the coastal province near Hong Kong and Macau have pipped their Beijing-based peers for the first time at least this year. Guangdong’s rise came after four developers based there made it to the growing list of bonds trading at stressed levels this week.

The change marks a shift in the locus of stressed corporate debt in China and points to rising risks in an industry which has historically enjoyed easy access to the primary market. Real estate firms borrowed record volumes of debt in the last two years and make up over a third of China’s outstanding junk bonds. Concern over the sector is now growing as the pandemic pummels profits across the nation.

To be sure, Guangdong’s rise to the top spot doesn’t necessarily mean a concentration of risk in the province itself as developers tend to have nationwide exposure. Instead, it indicates increasing caution over a sector which faces a $22.5 billion debt wall this year. Surging premiums offshore have already driven some builders to seek cheaper borrowing costs at home.

More broadly, there are signs of strain cropping up in the offshore market. Premiums on riskier dollar bonds have soared to eight-year highs this week, according to a Bloomberg Barclays index.