Exports grew 32.3 per cent in dollar terms in April from a year earlier, the customs administration said Friday, exceeding the 24.1 per cent median estimate in a Bloomberg survey of economists. Imports climbed 43.1 per cent, a sign of strong domestic demand and soaring commodity prices, resulting in a bigger-than-expected trade surplus of US$42.85 billion for the month.

Global appetite for Chinese goods remained strong in the month, thanks to stimulus packages introduced by developed economies that’s helped to fuel demand for household goods, furniture and electronic devices. With vaccine rollouts accelerating and more economies opening up, China’s export growth was widely expected to moderate this year as consumers start to spend more on services. But April’s data shows that hasn’t happened yet. 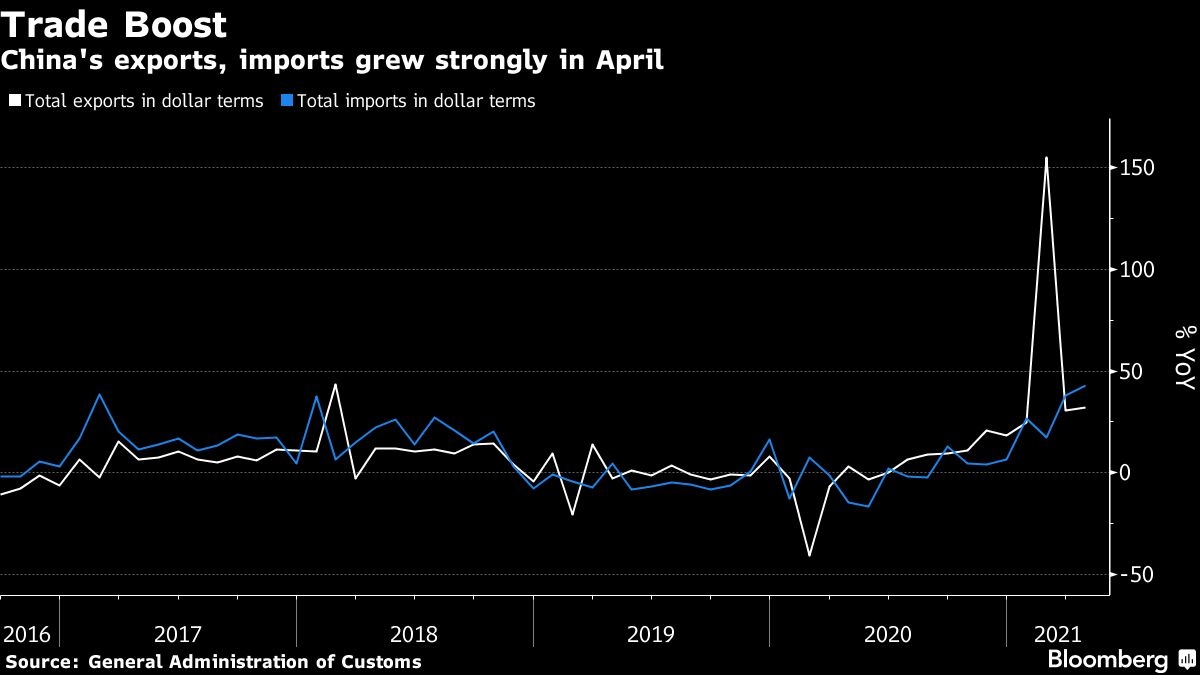 The low base from a year ago also helped to underpin the strong results, but even on a two-year average growth basis which strips out those effects, April’s export growth was 16.8 per cent, much stronger than pre-pandemic levels, according to analysis by Bloomberg Economics.

“Imports were lifted mainly by higher commodity prices, but also due to a recovery in domestic demand. These factors that supported China trade look set to continue in the near term.”

The U.S. was the biggest export market last month, accounting for 15.9 per cent of Chinese goods sold abroad. Southeast Asian nations bought 15.6 per cent of exports while the European Union purchased 15.1 per cent.

“We expect China’s export growth will stay strong into the second half of this year,” said Zhang Zhiwei, chief economist at Pinpoint Asset Management Ltd, citing strong growth in U.S. demand and continued coronavirus outbreaks in developing countries such as India causing production to shift to China. Those trends are likely to support China’s currency, he added.

Exports were also likely boosted because of a resurgence in coronavirus cases in several developing countries, including India and in Southeast Asia, Lu Ting, chief China economist at Nomura Holdings Inc., wrote in a note. That new wave of infections had a two-fold effect: reducing the competitiveness of these countries and forcing them to buy more medical goods like personal protective equipment from China.

Exports to India surged 144 per cent in April from a year earlier with the monthly value hitting a record US$7.8 billion.

Liu Peiqian, an economist at Natwest Group Plc, cited increased global demand for microchips, where Chinese companies are a key part of the supply chain, as another reason why “exports outperformance will likely remain a key theme” in China’s recovery. In volume terms, imports of industrial metals and energy products softened slightly in April, she added, suggesting that the domestic demand recovery could still be relatively weak.

At the Communist Party’s Politburo meeting last week, China’s top leaders pledged to accelerate the recovery in domestic demand and reiterated there would be “no sharp turn” on economic policy. But the government is focused on raising consumer spending on goods and services, while taking a cautious stance on property and infrastructure investment, which tends to be more import-intensive.

A strengthening recovery in Chinese consumer spending was indicated by the April services purchasing managers’ index compiled by Caixin Media and IHS Markit, which rose to 56.3 from 54.3 the previous month, well above the 50 reading that marks an expansion from the previous month. However, data from a recent five-day public holiday in China showed spending below pre-pandemic levels, suggesting China will remain dependent on overseas demand for much of its growth this year.

--With assistance from Tomoko Sato and Tom Hancock.