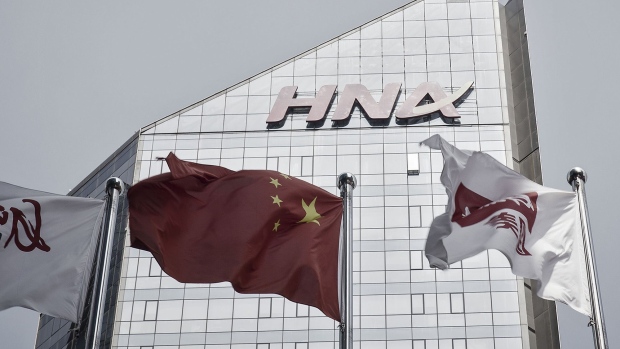 The chairman and CEO of the Chinese conglomerate HNA Group Co. have both been detained by police, the latest setback for a firm that is being managed by the government.

Chairman Chen Feng and CEO Tan Xiangdong were detained by police in the southern province of Hainan over suspected crimes, the company said in a statement late Friday, without providing details of what the alleged offenses were.

HNA Group’s operations are unaffected, the statement added, and its restructuring is moving forward smoothly.

Once a prominent shareholder of firms like Hilton Worldwide Holdings Inc. and Deutsche Bank AG, HNA is the embodiment of a short-lived era when Chinese conglomerates expanded aggressively with global acquisitions fueled by debt.

Weighed by more than $75 billion of debt even after shedding assets, the group’s core aviation business suffered during the coronavirus pandemic, triggering the government of Hainan to move in and take charge in February last year.

A key Communist Party-led committee at HNA left Chen, its founder, off a list of members earlier this year, signaling he was in trouble. The party committee was taken over by Gu Gang, leader of a government-appointed working group overseeing the company’s liquidity risk.