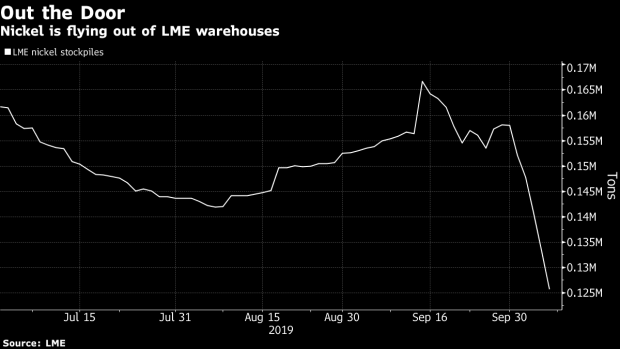 (Bloomberg) -- China’s Tsingshan Holding Group Co. was one of the main forces behind a record drawdown in London Metal Exchange nickel inventories last week, according to people familiar with the matter.

The company, the world’s biggest stainless steelmaker, bought the nickel to secure supplies ahead of a looming ban on raw nickel ore exports from Indonesia, said the people, who asked not to be identified because the deals are private.

While the LME’s warehouse network is designed as a last-resort source for exactly this type of supply crisis, the scale of buying could raise concerns about a potential shortfall if the drawdowns continue. Some traders and consumers have been scrambling to pick up metal since early September, when Indonesia confirmed plans to bring forward its ban. But the move last week was surprisingly sharp -- the nearly 25,000 tons that left the warehouses was the biggest decline in the four-decade history of the nickel contract.

Tsingshan is working with financing banks including JPMorgan Chase & Co. to take the metal off the exchange, the people said. Estimates for how much they bought range from 30,000 to 80,000 tons.

The company -- which is also a leading producer of a semi-refined form of the metal known as nickel pig-iron -- is likely facing a gap in its supplies and will need to feed its mills when exports from Indonesia are curtailed.

At Friday’s spot price of $17,906 a ton, the value of the metal withdrawn last week is worth about $450 million. LME stockpiles have declined further this week, with inventories plunging by a record 8,166 tons on Tuesday. Nickel prices traded 0.9% lower at $17,555 after LME inventory data showing the drop, paring earlier losses of as much as 3.3%.

The LME’s record of orders show that another 75,000 tons of metal are scheduled to be delivered out. People familiar with Tsingshan’s deals declined to specify how much more metal the company may be seeking to withdraw.

The purchasing activity is the latest sign of the clout that Tsingshan -- a privately owned company run by Chinese multimillionaire Xiang Guangda -- wields in the global nickel market.

After developing a reputation as a disruptive industry force for its role in popularizing nickel pig iron production in China, Tsingshan looks set to upend the industry’s supply and demand dynamics again. It’s a major investor in two projects in Indonesia aimed at making nickel chemicals for electric-vehicle batteries. That’s in addition to a huge stainless steel plant fed from local mines also owned by the group.

Spot contracts traded at the biggest premium to futures in 12 years last week, in a condition known as backwardation that’s a hallmark sign of a supply squeeze. Nickel prices have surged more than 60% in the year to date, on course for the biggest annual gain since 2006.

--With assistance from Martin Ritchie.

To contact the reporters on this story: Alfred Cang in Singapore at acang@bloomberg.net;Mark Burton in London at mburton51@bloomberg.net

To contact the editors responsible for this story: Lynn Thomasson at lthomasson@bloomberg.net, Nicholas Larkin