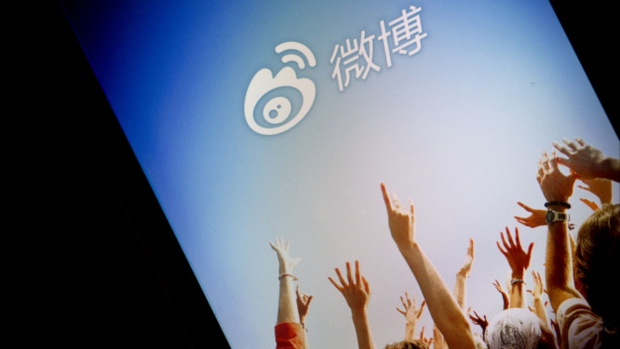 Weibo Corp., China’s largest micro-blogging service, is planning a second listing in Hong Kong as soon as this year, people familiar with the matter said, joining a growing cohort of U.S.-traded Chinese firms in seeking a trading foothold in the financial hub.

The Asian nation’s answer to Twitter Inc. is working with advisers on the potential share sale, the people said, asking not to be identified as the information is private.

Weibo’s American depositary receipts have climbed 41 per cent in the past year through Wednesday, giving the company a market value of US$13.3 billion. They climbed 2.8 per cent to US$60.50 at 5:55 a.m. New York time in premarket trading.

Deliberations are at an early stage and details of the share sale including size and timing could still change, the people said. A representative for Weibo was not immediately able to comment.

A wave of Hong Kong share sales by U.S.-listed Chinese firms, kicked off by Alibaba Group Holding Ltd.’s second listing in late 2019, continues to grow. E-commerce giant JD.com Inc. and online gaming firm NetEase Inc. are among the companies that raised some US$17 billion in 2020, data compiled by Bloomberg show. The listings act as a hedge against the risk of being kicked off U.S. exchanges as well as giving the companies a broader investor base closer to their home markets.

Other companies planning so-called homecoming listings this year include music-streaming service Tencent Music Entertainment Group, search engine giant Baidu Inc. and online car-trading platform Autohome Inc. The listings will add to what is shaping up to be a bumper year for stock offerings in Hong Kong after short-video company Kuaishou Technology’s wildly successful US$6.2 billion IPO earlier this month.

Internet pioneer Sina Corp. launched Weibo in 2009, swiftly amassing millions of registered users posting messages of 140 characters or less, and was listed on the Nasdaq in a 2014 IPO. Whereas Twitter is blocked in China, Weibo and other social media in the country are subject to state censorship.

Weibo, which is backed by Alibaba, reported 511 million monthly active users in the third quarter. It faces competition for eyeballs and advertising revenue from fast-growing short-video platforms from ByteDance Inc. and Kuaishou.