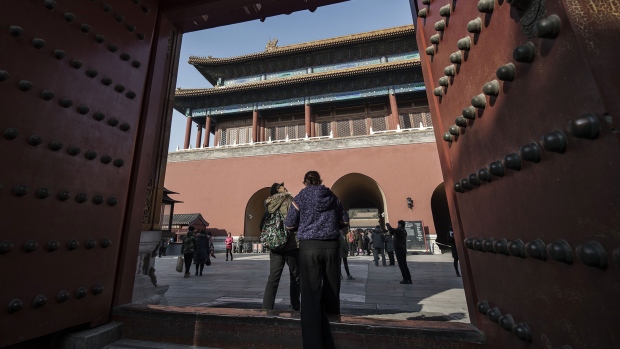 Visitors walk through a gate inside the Palace Museum at the Forbidden City in Beijing, , Photographer: Qilai Shen/Bloomberg

(Bloomberg) -- China’s holdings of U.S. Treasury securities fell in March for the first time in four months amid a simmering trade dispute between the world’s two biggest economies.

The Asian nation's holdings of notes, bills and bonds declined by $10.4 billion from the prior month to $1.12 trillion, according to Treasury Department data released Wednesday in Washington. Japan remained the second-biggest holder, with $1.08 trillion in holdings in March, up from February’s $1.07 trillion.

The data preceded the recent deepening of the trade war between the U.S. and China that's rattled financial markets and cast a shadow over the global economy. President Donald Trump raised tariffs on Chinese goods this month and threatened to impose more, drawing swift retaliation from Beijing. The escalating conflict has stoked speculation that China -- the largest non-U.S. holder of Treasuries -- could turn to other tools as leverage, such as selling U.S. assets, though that option is often dismissed as improbable.

The yuan fell about 0.3% against the dollar in March, after weakening near the closely watched level of 7 to the dollar in late October. The Chinese currency has lost more than 1% since May 6, the day after Trump tweeted his latest plan to hike tariffs.

To contact the reporters on this story: Andrew Mayeda in Washington at amayeda@bloomberg.net;Katherine Greifeld in New York at kgreifeld@bloomberg.net

To contact the editors responsible for this story: Sarah McGregor at smcgregor5@bloomberg.net, Scott Lanman