The unexpected drop in China’s exports in November shows one reason why the nation wants to agree on a phase one trade deal - U.S. tariffs are hurting China’s exports at a time when global demand is already weak.

Total exports in November dropped 1.1 per cent from a year ago, and to the U.S. they were down 23 per cent, the customs administration said Sunday. That was the worst result for exports to the U.S. since February and the 12th straight monthly decline. Overall shipments had been expected to rise 0.8 per cent, as retailers and companies stock up before the Christmas shopping season.

About 18 months of tit-for-tat tariffs have damaged both economies, with Chinese companies and American farmers selling less to the other side. When the two sides agreed to work on a ‘phase one deal’ in October there was hope that it would lead to a quick resolution of at least some of the underlying issues. However negotiations have stretched out and even if some of the tariffs are removed, both sides will be economically worse off than they would have been without the conflict.

“Weak global demand, especially in major trading partners such as the U.S., EU and Japan, has dragged on export growth” and the weaker yuan in November cut the dollar value of exports, said Wang Youxin, a researcher at the Bank of China Institute of International Finance. “Looking ahead, exports depend on the progress of the trade talks. If the phase one deal is reached, and there’s rollback of tariffs, companies may become more confident and exports could rise.”

The latest signs from the talks indicate that negotiators are moving closer to an agreement despite some sharp rhetoric and diplomatic spats over Xinjiang and Hong Kong. The U.S. side expects a phase one deal to be completed before the Dec. 15 deadline when new American tariffs on Chinese goods are scheduled to take effect, according to people familiar with the matter. If those tariffs were to go into effect on products like smartphones and computers, it would further damage China’s exports and raise prices for U.S. consumers. 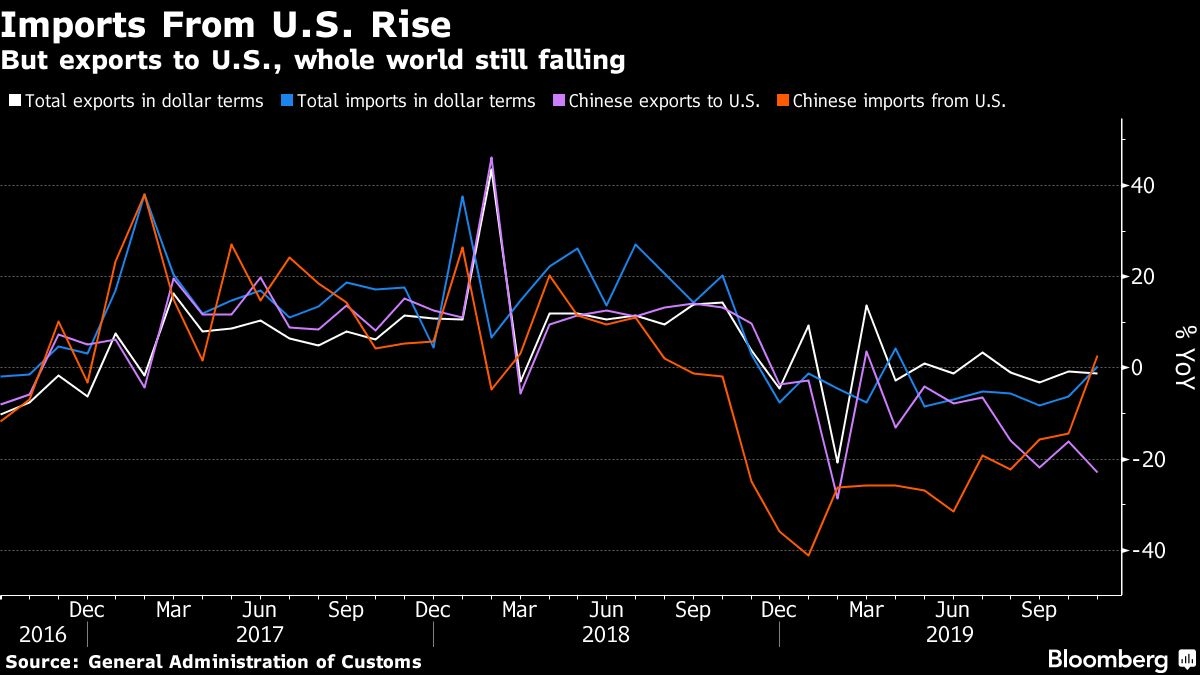 “Exports undershot expectations in November, registering a surprise drop even with a boost from a favorable base effect. The weakness is probably not over, going by the contractionary reading on new export orders in the latest purchasing managers data.”

The rebound in imports shows there is a short-term stabilization in the Chinese economy, according to Larry Hu, head of China economics at Macquarie Securities Ltd. in Hong Kong.

Some of that rise is due to a 2.7 per cent increase in imports from the U.S., which might be linked to increased goodwill purchases of American farm products ahead of a deal. The value of soybean imports was up 41  per cent from a year ago, although the government did not release information on which nations these were from.