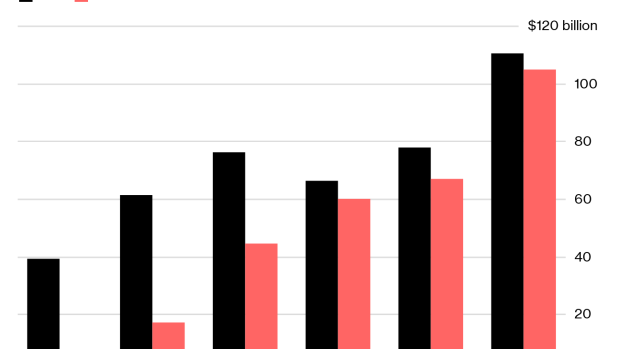 (Bloomberg) -- China went through a five-year surge in venture capital investment that fostered a new generation of startups from ride-hailing giant Didi Chuxing to TikTok-parent Bytedance Ltd. Now the boom may be over.

Venture deals in China plummeted in the second quarter as investors pulled back amid unpredictable trade talks and growing concerns about startup valuations. The value of investments in the country tumbled 77% to $9.4 billion in the second quarter from a year earlier, while the number of deals roughly halved to 692, according to the market research firm Preqin.

The second quarter of 2018 marked the peak for China venture deals with a total of $41.3 billion invested. That included a $14 billion round for digital payments giant Ant Financial, $3 billion for e-commerce upstart Pinduoduo Inc. and $1.9 billion for truck-sharing service Manbang Group (known also as Full Truck Alliance Group). By comparison, the largest venture deal in the second quarter of 2019 was a $1 billion investment in JD Health, the health care affiliate of e-commerce provider JD.com Inc.

China has never been through a widespread bust like the U.S. did after the dotcom boom, in part because the country’s venture market is so new. Years of steady growth in tech investments resulted in predictable -- and enormous -- profits. Whether the current downturn becomes a painful crash depends in large part on how VCs, entrepreneurs and regulators navigate terrain they’ve never seen before.

“We’re seeing real stress in the system for the first time,” said Gary Rieschel, a founding partner at Qiming Venture Partners who has worked in China and the U.S. “We have never seen a downturn in the China market. For 20 years, it’s been pretty much up and to the right.”

“We haven’t seen the same slowdown in other markets,” said Chris Elvin, head of private equity at Preqin. “It’s always tricky with quarterly numbers though. A quarter doesn’t necessarily mean a trend.”

China’s venture boom began in 2014 when Alibaba Group Holding Ltd. went public in the largest-ever initial public offering, making clear to investors the potential riches in the world’s most populous country. Venture deals tripled that year to more than $17 billion and proceeded to rise every year through 2018 when the total topped $105 billion, almost as much as in the U.S.

Along the way, firms like Qiming, Sequoia China, Tiger Global Management and SoftBank Group Corp. fostered some of the most valuable startups in the world. Bytedance, the force behind short-video app TikTok and other addictive services, sports a valuation of $75 billion, the highest anywhere according to CB Insights. Didi, the ride-hailing service that ousted Uber Technologies Inc. from China, was last valued at $56 billion, the second highest.

But the rise of China’s tech industry put it squarely in the crossfire of the trade war. The Trump administration has accused China of stealing intellectual property and unfairly subsidizing companies in strategic fields, including semiconductors, artificial intelligence and autonomous driving. In May, the U.S. blacklisted Huawei Technologies Co., preventing the telecom giant from buying American components, and is considering doing the same to a swath of startups.

The trade war gives investors one more reason for caution. Valuations had already grown vertiginous. High-profile startups such as smartphone-maker Xiaomi Corp. and delivery giant Meituan Dianping saw their stocks tumble after they went public, reinforcing the impression that private-market valuations had gotten out of hand.

So-called sharing economy startups have also tested the patience of their investors. Companies like Didi, Meituan and bike-sharing provider Ofo blitzed the market with heavy subsidies to grab market share from rivals, making up for their losses with venture money. Now there’s skepticism that many such companies will ever turn a profit.

“You’re really reaching the end of the shared economy -- this idea of let’s give away services for free and make up for it in volume,” Rieschel said. “Some companies -- Didi is the classic case -- are just not showing any ability to become profitable.”

A Didi representative didn’t respond to a message and email seeking comment.

Valuations haven’t declined yet in China though. The country’s startups have resisted so-called down rounds, when they raise money at lower valuations than an earlier round. “China entrepreneurs, more than any on the planet, will do unnatural things to avoid a down round,” Rieschel said.

Meanwhile, venture firms are pivoting to alternative business models, like enterprise software. Such startups are not only less capital intensive, they are at a stage of development where they require less money.

This also may simply be a time when venture investors opt for caution. Given the volatile negotiations between Donald Trump and Xi Jinping, it’s not clear what kind of opportunities China’s tech startups will face in the years ahead or how capital markets will treat the next big IPO filing.

“It won’t cost you that much to sit on your hands for a few months,” Rieschel said.

To contact the reporter on this story: Peter Elstrom in Tokyo at pelstrom@bloomberg.net

To contact the editors responsible for this story: Peter Elstrom at pelstrom@bloomberg.net, Edwin Chan, Colum Murphy