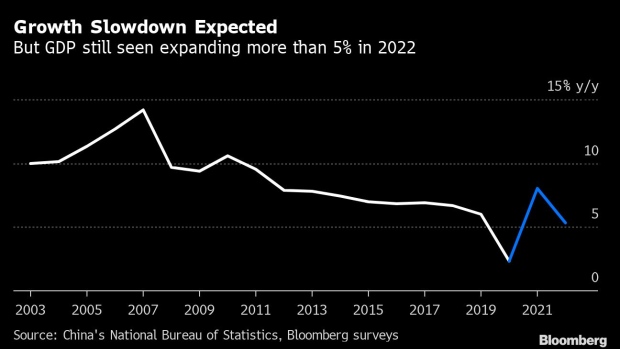 A resident hangs laundry to dry outside of her home in an older neighborhood in Shanghai, China, on Monday, Aug. 30, 2021. Chinese President Xi Jinping chaired a high-level meeting that “reviewed and approved” measures to fight monopolies, battle pollution and shore up strategic reserves, all areas that are crucial to his government’s push to improve the quality of life for the nation’s 1.4 billion people. Photographer: Qilai Shen/Bloomberg , Bloomberg

“We have full confidence in China’s economy next year,” Liu said in video speech Tuesday at the Hamburg Summit, according to a post on a government website. In 2022 China will step up efforts to create a better environment for small and medium-sized enterprises and foreign-funded enterprises, while maintaining the continuity, stability and sustainability of its macro policies, Liu said.

He pointed out that China is accelerating its “dual circulation” development strategy, in which the domestic market becomes the main growth driver and is supplemented by international demand. China will focus on expanding market access and promoting fair competition to create a better business environment next year, according to Liu.

“The experience of the past 40 years has made us realize that to achieve successful economic development, China must adhere to reform and opening up,” Liu said. For this year’s economic performance, Liu said growth is expected to exceed the government’s targets, as growth, employment, prices and the balance of payments so far have been generally normal.

China’s economic recovery momentum has weakened in recent months on the back of energy shortages, Beijing’s reining in of the property market and widespread Covid-19 outbreaks. Economists have downgraded their projections as downward pressures grow, and now expect gross domestic product to expand by 8% on year, according to a Bloomberg survey, still above the conservative target of “above 6%” growth set for this year.

The growth outlook for next year is uncertain, with several economists projecting below 5% expansion and a pick-up in monetary and fiscal support.

In his speech, Liu also called for China and Europe to strengthen economic and trade cooperation in the post-epidemic era, in areas including green and low-carbon transformation and supply chains.