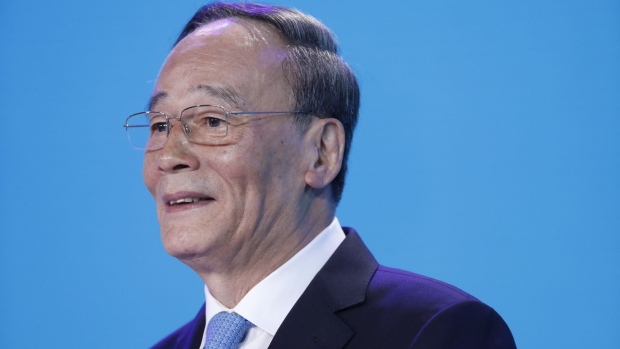 (Bloomberg) -- Vice President Wang Qishan was set to discuss China’s economic reform and opening up at a business forum, as Washington and Beijing inch toward a preliminary trade deal.

Wang addressed the same forum last year in Singapore, in which he reaffirmed China’s desire to move forward with trade talks while warning that his country wouldn’t again be “bullied and oppressed” by foreign powers.

Wang’s speech comes as the U.S. and China work to assemble a partial trade agreement, even as broader tensions mount in the U.S.-China relationship from human rights concerns over Hong Kong and the western region of Xinjiang to strategic competition in the South China Sea. The sides are making progress in key areas, according to people close to the talks, even as concerns grow that efforts to nail down the first phase of a broader deal are stalling.

U.S. President Donald Trump -- facing an impeachment inquiry at home -- may seek a political win by reaching a deal with China. Policy makers in Beijing face their own troubles with a slowing economy at home, as well as factory-price deflation, a fragile financial system and spiraling food costs in the wake of a catastrophic disease epidemic among the nation’s pig herd.

Trump is expected to sign legislation passed by Congress supporting the Hong Kong protesters, a person familiar said, after the bill was approved unanimously by the Senate on Tuesday and passed the House 417-1 on Wednesday.

To contact Bloomberg News staff for this story: Peter Martin in Beijing at pmartin138@bloomberg.net

To contact the editors responsible for this story: Brendan Scott at bscott66@bloomberg.net, Sharon Chen