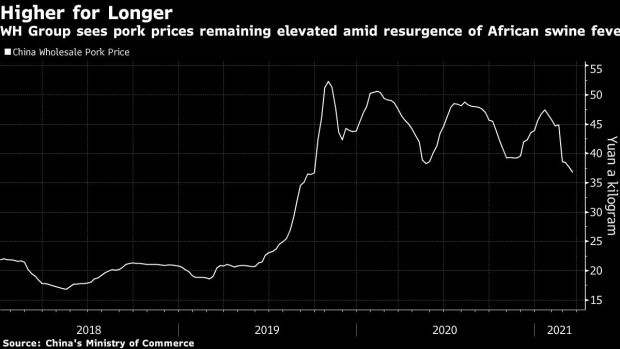 (Bloomberg) -- WH Group, China’s largest pork processor, said it will increase meat imports this year as local prices are likely to stay elevated following the resurgence of African swine fever in the country.

While Chinese pork prices will ease in the second half as supply expands, they’ll remain significantly higher than overseas, creating an opportunity for higher imports, Vice President Guo Lijun told reporters after announcing full-year results. Last year, the Hong Kong-listed firm imported 700,000 tons of meat, of which U.S. supplied 70% and the rest was from Europe and South America and includes chicken and beef.

The latest swine fever outbreak in China, especially in northern regions, is partly due to the use of “immature vaccines,” Ma Xiangjie, executive director, said at the briefing. This has hurt domestic hog supplies and may cause prices to remain high. However over the full year, pork prices will probably be lower than 2020, he said, without giving an estimate. WH Group did not detect the virus among the pigs it slaughtered.

The company expects to benefit from the recovery in Chinese consumption and local hog population from the 2018-19 swine fever outbreak, but sees challenges from rising costs and lower supply from the U.S. and Europe amid the coronavirus pandemic.

WH Group owns U.S.-based Smithfield Foods Inc., the largest pork producer in the world. Its Chinese operations contributed 66% to the group’s 2020 profit, while U.S. made up 24%, according to Guo. The company is planning to expand poultry sales this year.