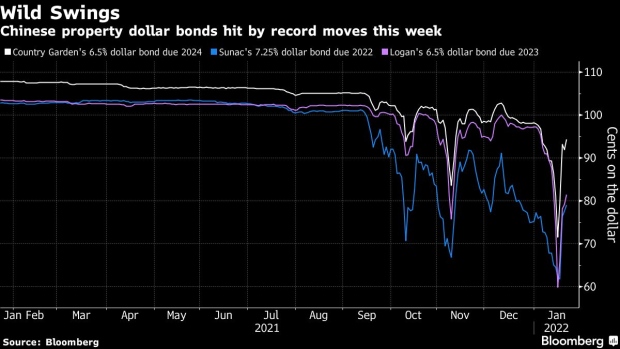 A man rides an escalator near the Jin Mao Tower, center left, and the Shanghai Tower, center right, in the Lujiazui Financial District of Shanghai, China, on Monday, July 29, 2019. Chinese trade negotiators will host their U.S. counterparts at a landmark of jazz-era Shanghai on the city's riverside Bund, re-opening trade talks with a marked change of atmosphere after an almost three-month hiatus. Photographer: Qilai Shen/Bloomberg , Bloomberg

(Bloomberg) -- The battle between fear and greed is wreaking havoc in Chinese financial markets.

While China bulls are finally getting some vindication as the nation’s stocks and bonds rally, the past week shows investors need to be prepared for violent swings. Take Country Garden Holdings Co., the nation’s largest developer. On Monday, its 2024 bond plunged 10 cents on the dollar to trade like a stressed asset, only to surge by a record 14 cents two days later. The Hang Seng China Enterprises Index was down for five straight days before rallying the most since July on Thursday.

After last year saw one of the worst relative performances in recent history for China’s markets, the country’s ultra-low valuations stand out. With the People’s Bank of China ramping up monetary easing this past week and pledging to do more, its dovish tone sets it apart from tighter policy in most major economies. Signs the Communist Party may pull back on its campaign against the real estate sector is adding to bullishness as traders look for alternatives to pricey global tech shares.

“We are starting to see more and more policy adjustments aimed at, what we see, as damage control,” said Citigroup Inc. strategists led by Dirk Willer. The “rally in property bonds is mainly short covering, but welcome nonetheless.”

There are plenty of investors, analysts and strategists staking their reputations on a 2022 rally in Chinese markets. Since the end of last year, Societe Generale SA, Goldman Sachs Group Inc., BlackRock Inc., UBS Group AG and HSBC Holdings Plc have all turned overweight on the nation’s equities. JPMorgan Chase & Co.’s Marko Kolanovic in December recommended going all in on China this year, predicting the MSCI China Index would surge almost 40%.

SocGen strategists say Chinese shares account for 20% of their global equity exposure in a multi-asset portfolio.

Such optimism has been repeatedly tested. The Hang Seng China gauge slumped to an almost six-year low earlier this month and the yield on Chinese junk dollar bonds surged above 20% as risks to the economy mounted.

“Many people in the market were too hopeful and too early calling for a strong rebound,” said Hao Hong, chief strategist and head of research at Bocom International.

Now bullish bets are proving more fruitful. The Hang Seng Index capped its fifth week of gains -- the longest winning streak in two years. Property bonds rose amid speculation authorities will take action to ease the liquidity crisis for the industry. A local media report said Friday banks have accelerated approvals of mortgage loans in some major cities. Regulators may relax curbs on developers’ access to funds from presold homes, according to reports earlier in the week.

Even as stocks ended the week higher in Hong Kong, measures of expected swings rose as derivatives traders bought protection. The city’s VIX equivalent climbed 11%, the most in two months. The record-breaking rally in Chinese property bonds petered out on Thursday as investors questioned whether more relaxed rules on the use of escrow funds would provide sufficient short-term liquidity.

Reasons for caution remain. Many weaker developers with looming maturities are still shut out of the dollar bond market, and concerns over hidden debt risks are keeping traders on edge. China Aoyuan Group Ltd. just became the eighth known developer to default on dollar debt since October. China’s crackdown on the tech industry shows no signs of letting up, with Beijing vowing to curb their influence and root out corruption tied to the “disorderly” expansion of capital.

There’s also no real playbook for what happens to markets when the PBOC diverges this much from the Federal Reserve on policy. China’s central bank has rarely cut interest rates during U.S. tightening cycles -- according to one economist, the last time was in 1999 when China was effectively shut to most international investors.

“There is clearly a need to introduce more measures to pre-empt systemic risks, and we expect further policy fine-tuning in the coming weeks,” wrote DBS Group currency and credit strategists in a recent note. “Volatility remains the theme.”