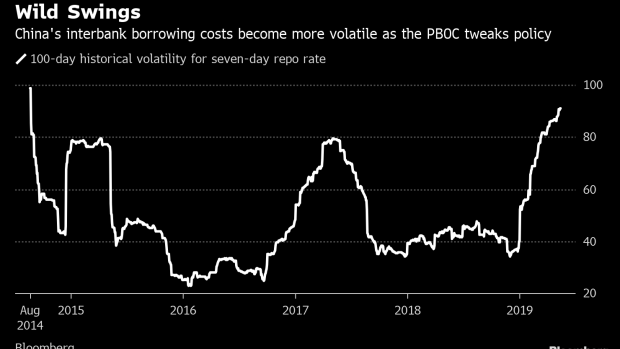 (Bloomberg) -- China’s bond traders are throwing away the script this year as the central bank repeatedly tweaks policy to keep up with shifts in the economy.

The lack of visibility is sending tremors through the interbank lending market, which is typically a source of cheap leverage for government-bond buyers. The seven-day repurchase rate -- a gauge of China’s funding costs -- has turned the most volatile since 2014, 100-day historical data show. That has made it very difficult for traders to know how much it will cost them to buy bonds.

One person at a commercial bank, who did not want to be named commenting on the market, said the swings have suddenly rendered her five-year trading experience useless. Data Wednesday showing the economy was weaker than expected in April may add to the volatility, with analysts divided on whether it strengthens the case for Beijing to increase stimulus. The recent turn in U.S.-China trade relations isn’t helping either.

"Volatility will continue in the near term," said Linan Liu, greater China macro strategist at Deutsche Bank AG. "This will be negative for leveraged investors, who will need higher investment returns from bonds and stocks to compensate for uncertainties in their funding costs."

The People’s Bank of China has been shifting between easier and tighter monetary policy this year. After making a broad reserve-ratio cut in January, it has been tightening marginally since the end of March as the economy improved. Now, traders are speculating the central bank may loosen policy again after trade talks ended in stalemate and recent data missed estimates. Sun Guofeng, a PBOC official, said at a briefing last week that money market rates are "stable" and China will continue to make "marginal adjustments" to liquidity.

Tighter liquidity in the financial system may also be adding to the volatility, Deutsche Bank’s Liu said. Interbank rates tend to climb when lenders face seasonal demands such as tax payments. That was the case when the overnight repo rate surged to a four-year high of 3% in mid-April as banks hoarded cash for that purpose, then tumbled to a three-year low within weeks. The seven-day rate has moved by 10 basis points on average every day this year, twice as much as in 2018, according to Bloomberg calculations.

Investors aren’t sure how to proceed in this environment, said the trader at the commercial bank, making it hard to execute short-term trades. Bank of America Corp.’s Claudio Piron agrees.

“The environment is too uncertain,” said Piron, co-head of Asia foreign-exchange and rates strategy at Bank of America Merrill Lynch.

To contact the editors responsible for this story: Sofia Horta e Costa at shortaecosta@bloomberg.net, Philip Glamann