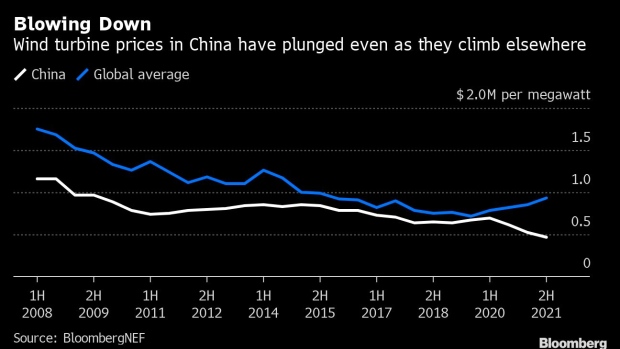 Wind turbines manufactured by Shanghai Electric Group Co. stand at a wind farm operated by China Huaneng Group in this aerial photograph taken in Qidong, China, on Thursday, June 7, 2018. China, the world's largest wind power producer, is considering setting a national target to reduce average wind curtailment rates to less than 10 percent next year and to about 5 percent by 2020, according to an April 12 government policy proposal document. , Bloomberg

(Bloomberg) -- China’s biggest wind turbine manufacturer said there’s no more room for prices to fall in the largest market after a dramatic decline in costs.

Prices for turbines in China have plummeted from about $700,000 per megawatt in early 2020 to about $470,000 at the end of last year, and bids for new projects are averaging about $370,000 now, according to BloombergNEF. Instead of seeking even lower prices, developers should shift their focus to quality and long-term returns on investment, Xinjiang Goldwind Science & Technology Co. Chairman Wu Gang said Friday in an online question and answer session.

“The price of wind turbines has reached the bottom,” he said. “There is no room for further price declines.”

China’s wind turbine costs have plummeted amid growing domestic competition after the government stopped subsidizing projects at the end of 2020. The drop has come even as prices have risen in Europe amid surging power costs.

Goldwind, which supplied more turbines in China than any other company, and second-most in the world, is focusing on larger models to drive future growth, Wu said. The company this year will launch a 7-megawatt onshore turbine and a 15-megawatt offshore version, he said.