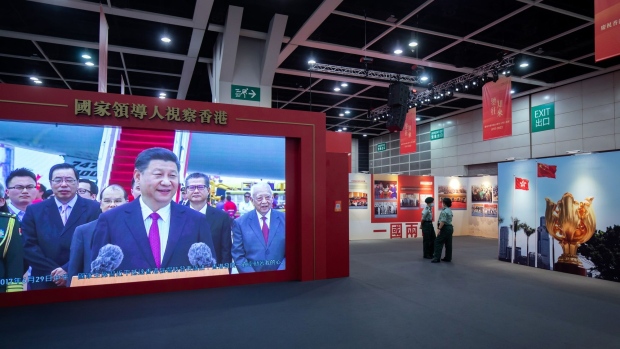 A screen showing a video featuring Xi Jinping at an exhibition in Hong Kong on June 22. Photographer: Paul Yeung/Bloomberg , Bloomberg

The official Xinhua News Agency reported Saturday that Xi will “attend” both a meeting celebrating the city’s 25th anniversary of Chinese rule and the swearing-in ceremony of incoming Chief Executive John Lee and his government, without providing details.

When Xi last visited the city five years ago, the official statement announcing his trip was more explicit, with Xinhua specifying the Chinese leader would “go to Hong Kong to attend the celebration of the 20th anniversary” of the city’s handover from Britain.

A representative from the Hong Kong government didn’t immediately respond to questions on whether the Chinese leader would attend the July 1 celebrations in person on Monday.

Tam Yiu-chung, Hong Kong’s sole delegate to the National People’s Congress Standing Committee, told a local radio show on Monday that he wouldn’t “interpret” whether Xi would travel to Hong Kong for the landmark event, according to news outlet RTHK.

Local newspaper Singtao reported Monday citing unidentified sources that Xi will visit Hong Kong on Thursday and Friday, but won’t stay overnight. Instead, he will base himself in the neighboring southern city of Shenzhen, the publication added.

Xi’s physical absence at Friday’s celebrations would be significant. A Chinese president has inaugurated every Hong Kong leader in person since Britain returned the city to Beijing in 1997. But Lee takes office in unprecedented circumstances. Xi hasn’t left the mainland since January 2020, as his pandemic policy largely closed the country’s borders -- including its link to Hong Kong -- and limited the Chinese to virtual attendance of international events.