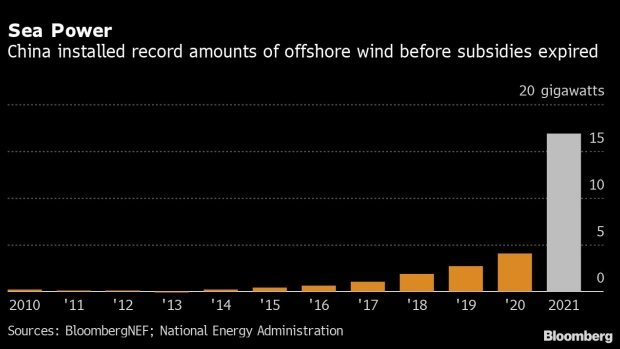 (Bloomberg) -- President Xi Jinping has added his heft to the view that efforts to achieve China’s climate targets need to work in lockstep with the government’s other objectives, as policy makers seek to thread the needle between a sometimes conflicting array of environmental and economic aims.

China is both the world’s biggest emitter and its largest consumer of commodities. The other priorities highlighted by Xi include delivering adequate supplies of food, energy and materials “to ensure the normal life of the masses,” according to comments made at a Politburo session reported by the official Xinhua news agency on Tuesday.

Xi said China needs to make sure it has enough coal, and that oil and gas output grows steadily. His comments follow an unprecedented energy crisis that struck the nation in the autumn, as well the pledge made at last year’s climate talks in Glasgow to phase down the use of fossil fuels. In his latest comments, Xi also called China’s mission to reduce carbon “urgent and difficult” and said that cutting emissions can’t mean cutting productivity.

Xi established China’s carbon targets in 2020, pledging to peak emissions by the end of the decade and deliver a carbon neutral society by 2060. They marked a step change in China’s approach to global warming and sparked a flurry of directives from across government and industry as policy makers and company executives sought to incorporate the president’s vision.

But in July last year, the Politburo seemed to change tack, urging an easing of the aggressive measures taken to reduce emissions because they were hampering efforts to stimulate slowing economic growth.

The central problem that has confronted China is that its carbon policies have constrained the supply of highly polluting commodities like coal, metals and fertilizers, pushing up prices and making Beijing’s attempts to rein in inflation a lot more difficult.

To a large degree, Xi’s intervention seems designed to set the tone for policy makers rather than signal any substantive change in direction. The government has already released five-year plans in recent weeks across a swathe of industries, including for materials and energy efficiency, which build on last year’s overarching policy directive that will guide China’s economic development through 2025.

Xi has long stressed the need to strengthen domestic oil and gas production. But his latest, broader, comments once again bring China’s persistent anxieties around the supply of food, energy and materials to the fore. And they highlight how the campaign to reduce emissions has at times come into direct conflict with efforts to check commodities prices, which have surged over the past year in large part because of a shortage of coal and rising power costs.

Coal is the raw material that best embodies China’s environmental and economic balancing act. It provides more than half of the nation’s energy and most of its electricity. It’s also the dirtiest fossil fuel and the biggest contributor to the country’s emissions.

Curbing coal use is the best way for China to meet its commitments to limit the rise in global temperatures. But last year it was forced to ramp up production of the fuel to record levels to stave off the worst effects of the power crisis.

Xi is clearly re-emphasizing a safety-first approach to energy generation, which will support the development of renewable power, but backed-up by coal, said Leo Wang, an analyst with BloombergNEF.

Another key commodity is steel, which accounts for about 15% of the nation’s carbon. There, China was successful in cutting outright production last year in order to curb emissions. But whether it can keep that cap in place is uncertain, given the need to stimulate the economy with renewed infrastructure spending.

BNEF for one expects a new approach this year, “with less emphasis on net capacity reduction as China looks to adopt greener steelmaking technologies,” according to a report on Tuesday.

Also of interest is the fact that China’s latest five-year plan for energy efficiency failed to reiterate its target of reducing carbon intensity in the economy by 18%, which could suggest less emphasis on that measurement even as the nation advances its broader climate goals.

In his latest comments, Xi also said that hitting carbon targets can’t be a “one size fits all” exercise and that local governments will need to move at different paces. In a report on Tuesday, Greenpeace noted some vast regional differences, with emissions in Beijing on a downtrend over 2005 to 2019, while the manufacturing hub of Zhejiang province saw an increase of 49%.

China’s latest directive on coal also calls for regional differentiation, with consumption cuts of as much as 10% planned in some of the most industrialized areas through 2025 as China seeks to make good on its promise in Glasgow to ensure that national coal demand will begin to drop from 2026.

China now has the largest fleet of offshore wind turbines in the world after added a record amount of the renewable energy last year to help meet its climate goals. The surge came as developers raced to get projects connected to the grid before national subsidy payments lapsed.