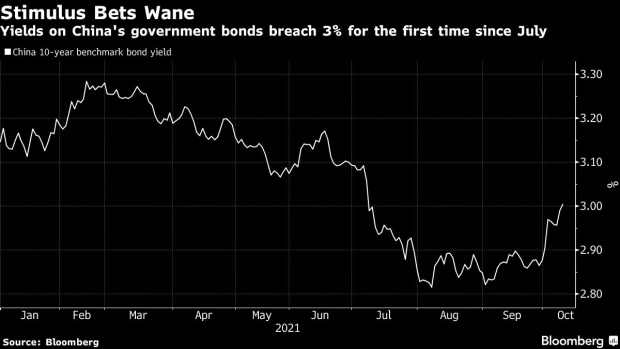 The yield on China’s 10-year bond rose as high as 3.02%, crossing the 3% level for the first time since early July. Bond futures fell by the most in two months. Sun Guofeng, head of the monetary policy department at the People’s Bank of China, said Friday that the inflation risk is “controllable”. Zou Lan, another PBOC official said risks from Evergrande are unlikely to spread.

“China government bond yields rose due to weakening market conviction on reserve requirement ratio cuts,” said Kiyong Seong, a strategist at Societe Generale in Hong Kong. The nation’s eroding fundamentals may sustain a possibility of RRR cut or at least ample liquidity provision, he said, adding that yields could stabilize slightly below 3%.

China’s economy slowed more than expected in the third quarter weighed by the slump in the property market and an energy crisis. Still, the People’s Bank of China has been reluctant to add additional cash into the banking system this month in a sign it’s wary of taking policy action that could fuel inflation.

Goldman Sachs Group Inc. economists said they no longer expect China to cut the amount of cash banks must hold in reserve this year after the central bank pledged to keep overall liquidity conditions relatively stable. It could rely on its open market operations and medium-term lending facility instead to manage liquidity fluctuations, they said.