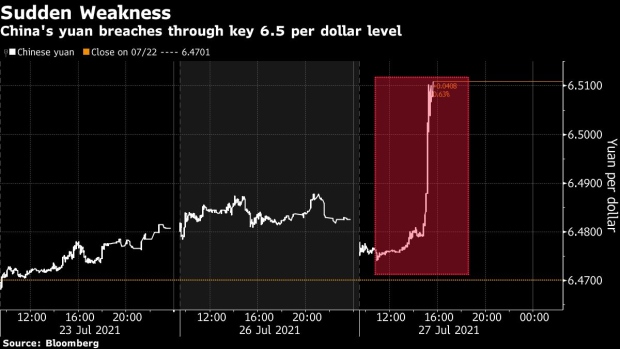 (Bloomberg) -- China’s government bonds and the yuan slid in tandem, amid speculation that overseas hedge funds have stepped up liquidating the country’s assets after a rout in shares deepened.

The yield on the most actively traded 10-year government bond rose seven basis points to 2.94% Tuesday afternoon, the most since in a year. The offshore yuan fell as much as 0.6% to 6.52 per dollar, through the key 6.5 level for the first time since April. Stock benchmarks in China and Hong Kong extended declines, with the Hang Seng Index plunging as much as 5.5%.

“There is a widespread rumor in the market that some U.S. funds are selling Hong Kong and China assets aggressively, as the U.S. may restrict investments in these places,” said Li Kunkun, a trader from Guoyuan Securities Co. “Although we can’t verify if it’s true or not, the market fears that foreign capital will flow out from the Chinese stock market and bond market on a large scale, so the sentiment is badly hurt.”

Risk aversion has emerged in China after a sudden policy change on education companies followed crackdowns on technology firms, raising concerns on a swathe of sectors in the equity markets. Curbs in financing for the property sector, and signs of an expanding Covid-19 outbreak are also weighing on growth expectations.