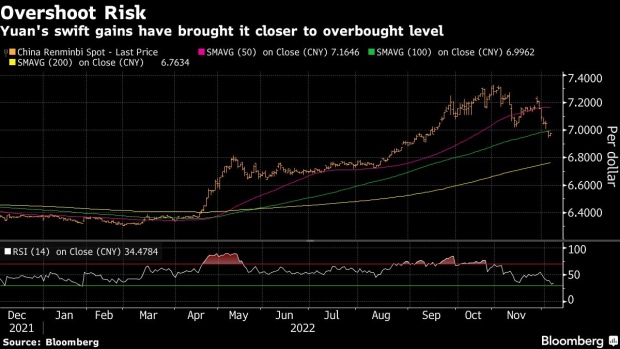 (Bloomberg) -- The yuan rally spurred by China’s reopening optimism is set to face a reality check as doubts grow on whether any economic rebound will match the currency’s rapid gains.

The yuan wiped out nearly a third of its yearly loss last month before surging past the key 7 per dollar level on Monday. Its appreciation beyond 6.95 would suggest the advance is likely overdone, according to Societe Generale AG, while UBS Group AG strategists expect the yuan to end the year at 7 per dollar and weaken in early 2023 with large fluctuations.

Analysts are concerned that the euphoria will fade as growth data are likely to be weak, and virus infections may rise and disrupt the economy when Covid curbs are dismantled. Uncertainty on whether the dollar would remain weak into next week’s Federal Reserve meeting is also inducing caution.

“Reopening is a key precondition for China returning to its potential growth path, but we still would like to point out that the real picture may not be as rosy as it seems,” Ting Lu, chief China economist at Nomura International wrote in a note. He sees export growth becoming a drag in 2023 on top of likely economic disruption due to surging cases, both of which may portend a slower-than-expected growth rebound.

Skittishness in the currency market became apparent on Wednesday when the offshore yuan pared gains of as much as 0.3% after data showed China’s trade weakened. The currency remained under pressure even after authorities eased a range of Covid restrictions, including allowing some people to quarantine at home rather than in centralized camps and scrapping virus tests to enter most public venues. It fell on Thursday to trade around 6.98 per dollar.

“The recent rally in the yuan is nearly fully attributable to the outlook of reopening based on a series of easing restrictions from individual local governments,” said Kiyong Seong, Lead Asia Macro Strategist at Societe Generale in Hong Kong. “The upcoming weak data which might have a lag is unlikely to be compatible with the current rally.”

Option market indicators are signaling mixed sentiment toward the yuan and expectations of future swings remain high as per the currency’s one-month volatility gauge. And while option trading has turned more neutral from favoring protection against yuan losses versus the dollar a month ago, hedging fees have increased to reflect uncertainties, yuan’s volatility data show.

China is not ready for a fast reopening yet with its current vaccination rates and hospital resources, Morgan Stanley economists warned this week. The yuan may remain choppy in the next few months in a range of around 6.80 to 7.20 per dollar, until “living with Covid” is achieved, according to Australia & New Zealand Banking Group Ltd.

There’s also market speculation on whether the People’s Bank of China would push back against runaway gains in the yuan, in a reversal of its efforts earlier this year to support the currency in the face of the Fed-driven dollar rally.

“We remain prudent about riding much more yuan strength at present, as domestic demand in China has not gained enough momentum to help the economy, which needs the support of external demand and requires a weak currency,” according to a UniCredit Bank AG note. The PBOC may help contain volatility if there’s sustained yuan strength against a basket of peers and if the currency’s gain weighs on exporters, Barclays Plc strategists said.

Investors should prepare for uncertainty and volatility as Covid outbreaks could disrupt the market and rate hike decisions in other economies could change, according to a commentary carried in the official Securities Times Tuesday. Sustainability of the dollar’s decline and Japan’s currency intervention could pose risks to the yuan, said Xie Yaxuan, a macro analyst at China Merchants Securities.

(Updates with UBS’ yuan forecast in the second paragraph and market levels in the fifth paragraph.)