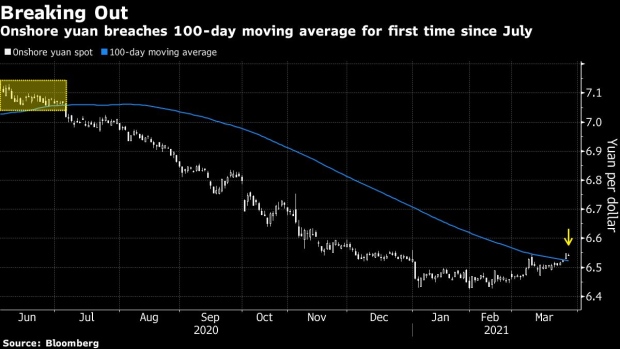 Visitors walk in Qianmen area in Beijing, China on Sunday, Oct. 4, 2020. A significant rebound in domestic travel over the Golden Week holiday is fueling optimism that consumers are starting to spend again after the pandemic-induced slump. Photographer: Yan Cong/Bloomberg , Bloomberg

(Bloomberg) -- China’s daily yuan fixing is once more drawing attention. A bout of sudden weakness in the currency has traders looking closely at the reference rate again, scouring for policy signals.

A slide in the yuan on Thursday to levels last seen in December was followed by the People’s Bank of China setting the reference rate to the dollar at the weakest level in almost three months.

After a relentless advance for eight months against the world’s reserve currency, the yuan has dropped about 1.7% since a January high. In a statement published after Wednesday’s quarterly meeting of the monetary policy committee, the central bank said it will make the Chinese exchange rate more flexible.

“The renminbi might have reached an interim peak against the dollar recently and the steepest part of its ascent may be behind us,” said Fiona Lim, a senior currency analyst at Malayan Banking Berhad in Singapore. “An equity correction at home, a sharp rise in Treasury yields and jitters in broader global markets could keep the dollar supported versus the onshore yuan.”

The dollar-yuan is back above its 100-day moving average for the first time since July, a key technical signal that could point the way for more weakness in the Chinese currency. It was at 6.54 on Friday.

Attention is returning to the Chinese currency at a time when the yuan reference rate is easier than ever to decipher. Analyst estimates of the daily rate have become more accurate, reflecting how policymakers are allowing market moves to determine it. Forecasts in the daily Bloomberg survey of traders and strategists -- compiled here -- were on average just one pip weaker than the official number in the month after the Lunar New Year holiday.

The fixing is the most obvious tool the PBOC has to influence its currency, setting a reference rate each trading day at 9:15 a.m. Beijing time and then allowing the yuan to move 2% in either direction. A rate that’s significantly stronger or weaker than expected is typically considered a signal from Beijing.

From Fixing to Signaling, How China Manages the Yuan: QuickTake

The shift in transparency is part of Beijing’s efforts to pare back control in the currency market as it moves toward a long-term goal of encouraging global usage of the yuan. It moved to loosen its grip further last October, with the yuan ending the year almost 7% stronger against the dollar.

​Before last week, the onshore yuan was trading in a tight 1,200 pip range against the dollar this year, a gap five times smaller than seen in the entire 2020.

Though it has slipped about 0.2% against the dollar this year, the yuan has shown continued strength against most other major currencies -- including a 5% plus rise against the yen and Swiss franc, and a more than 3% gain versus the euro.

That’s partly because it had been moving in lockstep with the U.S. currency as the world’s two largest economies rebound from the pandemic quicker than global peers.

Any signal that the authorities are willing to let the yuan trade more freely could now accelerate its decline versus the dollar. Options traders onshore have already begun betting on that scenario with one-month and two-month risk reversals -- a gauge of expectations for the dollar-yuan -- rising to their highest since December.

“I think it will become more volatile from here as Treasury yields rise and tensions with the West escalate,” said Dariusz Kowalczyk, chief China economist at Credit Agricole CIB in Hong Kong. “The yuan peaked when it reached 6.40-ish earlier this year.”