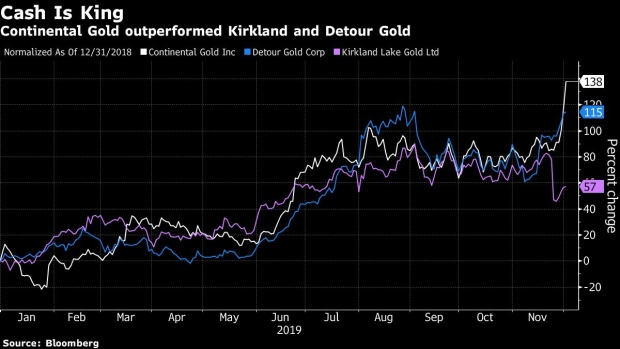 Gold bullion bars sit following casting at the Rand Refinery Ltd. plant in Germiston, South Africa, on Wednesday, Aug. 16. 2017. Established by the Chamber of Mines of South Africa in 1920, Rand Refinery is the largest integrated single-site precious metals refining and smelting complex in the world, according to their website. Photographer: Waldo Swiegers/Bloomberg , Bloomberg

(Bloomberg) -- Cash is king and will be hard to top by a rival bidder, according to the head of Continental Gold Inc. which agreed to a C$1.37 billion ($1 billion) takeover offer from China’s largest listed producer of mined gold.

Continental’s shares rose as much as 11% in Toronto on Monday after the offer from Fujian-based Zijin Mining Group Co. was announced. That’s in contrast to Kirkland Lake Gold Ltd., whose shares plunged 17% on Nov. 25 after it made an all-stock $3.7 billion takeover bid for Detour Gold Corp.

“Cash bids are very rare in the gold mining space and we delivered one,” Ari Sussman, chief executive officer of Toronto-based Continental, said in a phone interview on Monday. Only a handful of gold miners would be able to pull it off, he said.

The deal is the latest in a flurry of consolidation in the mining industry. Barrick Gold Corp. took over Randgold Resources Ltd. and Newmont Mining Corp. acquired Goldcorp Inc. last year and smaller miners are hurrying to keep up and stay in the game.

Speculation has long-brewed that Continental was a takeover target. Sussman said he started shopping the company after Newmont’s acquisition of Goldcorp in January, figuring that Newmont, which owns 18.4% of Continental, would have its hands full with Goldcorp and be looking to get rid of non-core assets.

Zijin will pay C$5.50 a share for Continental and said Newmont was supportive, according to a statement. The deal will give Zinjin control of Continental’s Buritica gold project in Colombia, which is currently being developed. Continental share were trading at C$5.36 at 1:55 p.m. in Toronto, up almost 10%.

“There were obviously multiple levels of interest” for Continental, Sussman said. In terms of possible rival bid, he thinks “Anything is possible but it’s tough to beat the bid number.”

The takevover by a foreign company will need Canadian government approval and relations between the two countries have been tense of late with China holding two Canadians in prison and Canada holding the CFO of Huawei Technologies Co. on an extradition order from the U.S.

It “would be very far-fetched” to have any pushback for this deal, Sussman said. “Maybe that question would have been more valid if our asset was in Canada,” he added. “This is more China coming to Colombia as governments are supportive of each other.”

Steven Butler, an analyst at GMP Securities Ltd., said the value of the deal was less than hoped for but he doesn’t see a superior offer for Continental forthcoming “given the geopolitical risk associated with Colombia, the potential working capital-funding risk and the all-cash nature of the deal.”

“Look at the laundry list of companies which have gone into production in last five years and look at the challenges they faced,” he said. “We thought this would be the right time, for someone with deep pockets, to take over our excellent team.”

To contact the reporter on this story: Aoyon Ashraf in Toronto at aashraf7@bloomberg.net

To contact the editors responsible for this story: Brad Olesen at bolesen3@bloomberg.net, ;David Scanlan at dscanlan@bloomberg.net, Jacqueline Thorpe