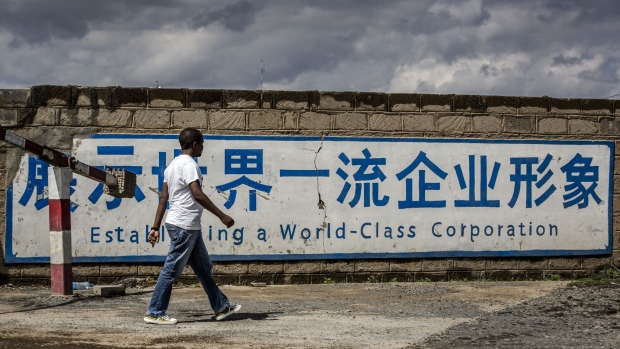 A pedestrian walks past a sign for China Communications Construction Co. outside their Standard Gauge Railway (SGR) line project headquarters in Maai Mahiu, Kenya, on Thursday, May 9, 2019. China is now the single largest financier for infrastructure in Africa, funding one-in-five projects and constructing every third one, according to a Deloitte report. Photographer: Luis Tato/Bloomberg , Bloomberg

(Bloomberg) -- China said it was false to claim that its lending practices have pushed African nations into debt traps, blaming a host of economic factors instead and criticizing media reports on the topic.

African nations’ debt problems are a historical issue, and also the result of rising protectionism and currency factors, Zhou Liujun, vice chairman of China International Development Cooperation Agency told reporters in Beijing on Tuesday. The agency is a body under the State Council that provide plans and policies on foreign aid.

“Facts and data fully show that this accusation is purely politically driven,” he said. “Its real intention is to drive a wedge between China and Africa’s friendly and cooperative relations.”

China fully considered the debt condition of African nations and their repayment capabilities when offering loans, Zhou said, adding that it will “strengthen cooperation and communication with different parties to help African countries to face their debt problems.”

China has come under fire for its lending practices to developing nations, particularly around the confidentiality of contracts between its state banks and debtor nations. Several African countries, including Kenya and Zambia, have struggled to repay their loans as the Covid-19 pandemic wreaked havoc on their economies.

On the Paris Club of mainly Western creditor nations, Zhou said China has been involved in some of the club’s activities and has smooth communication with its members.

The Paris Club last year combined forces with the Group of 20 nations to provide debt relief to poorer nations. The World Bank and others have pressured China to provide more relief.

Deng Boqing, vice chairman of the development agency, said at the same briefing that Beijing has no tolerance for corruption in projects linked to its Belt & Road Initiative, a massive multi-country infrastructure program. China has been transparent in its BRI projects, he said.