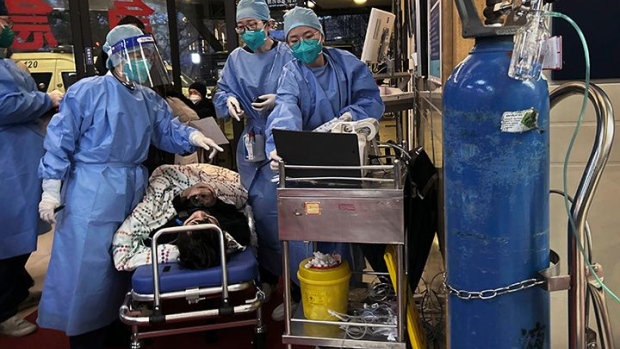 SHANGHAI, CHINA - JANUARY 14: (CHINA AND HONG KONG-OUT) Medical staff triage a patient after being brought by ambulance at the entrance of a busy hospital on January 14, 2023 in Shanghai, China.Chinas health care system has been struggling to cope with a surge of COVID-19 infections since the government ended nearly three years of tough zero COVID controls. At least 900 million people have been infected, according to a Peking University study, and authorities have reported 60,000 COVID-related deaths in hospitals alone in the past month. Infections have peaked in major cities including Beijing and Shanghai, but a second wave is expected to hit in rural areas with hundreds of millions of people traveling to their hometowns during the Lunar New Year holiday. Health officials are concerned that rural populations tend to be older, and the medical system in smaller towns and villages are not as well-resourced as bigger cities. (Photo by Kevin Frayer/Getty Images) , Photographer: Kevin Frayer/Getty Images AsiaPac

(Bloomberg) -- The number of Covid-related deaths and severe cases at Chinese hospitals have declined by more than 70% from peak levels reached in early January, according to the Chinese Center for Disease Control and Prevention.

Daily fatalities at hospitals across the country slid to 896 as of Monday, down from a high of 4,273 on Jan. 4, the center said in a statement published Wednesday.

China was urged by the World Health Organization earlier this month to release more detailed information on its Covid situation as the virus spreads rapidly throughout the country after Beijing’s abrupt end to Covid Zero. The government also drew criticism for dramatically narrowing its definition of a Covid death and halting daily caseload reports.

Authorities have since reported on deaths that fall outside the narrower definition, which only counts fatalities from infected people with respiratory failure, in an attempt to appease the concerns. Still, the true toll could be hundreds of thousands higher than the official figure that counts only deaths at hospitals.

Separately, the CDC said Wednesday that daily visits to fever clinics dropped to 63,000 on Monday, down almost 98% from a peak of 2.87 million on Dec. 23.